Schematic diagram of the HVDC Volgograd-Donbass

The HVDC Volgograd – Donbass is a 475 km long, originally designed for 400  kV bipolar high-voltage direct current transmission line (HVDC), which is used to transfer energy from the Volgograd hydropower plant to the Donbass basin (and vice versa). The HVDC Volgograd – Donbass is the second HVDC system to be built in the former Soviet Union after the now closed HVDC “ Elbe Project ” from Kaschira to Moscow. The system is in poor condition today and is operated at 100 kV.

The terminal of the hydroelectric plant Wolgograd, the converter station Wolschskaja located on the dam of the power plant at 48 ° 49 '34.0 "  N , 044 ° 40' 20.0"  O . Each of the two poles consists of 4 three-phase valve bridges connected in series, which form two twelve-pulse bridges connected in series. Originally, all valves in the plant were designed for mercury vapor rectifiers for a voltage of 100 kV and a maximum current of 938 amperes. In 1977 the mercury vapor rectifiers in a valve bridge were replaced by thyristors . The converter transformers of the Wolschskaja converter station are fed directly from the generators of the Volgograd hydropower plant with 14 kV three-phase current, with two generators connected in parallel hanging on one transformer. In addition to the two secondary windings required to implement the twelve-pulse circuit , the converter transformers also have a third secondary winding to feed the generated energy into the 220 kV network. ! 548.8261115544.672222548.826111111111 44.672222222222

The converter station has no harmonic filters . All the reactive power required to operate the converters is supplied by the power plant's generators. 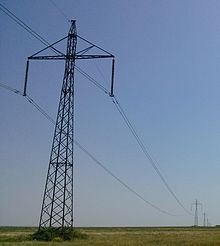 The line to the Donbass area has a length of 475 kilometers and is designed as an overhead line in its entire length . The masts of the line have - like most masts of HVDC overhead lines - a traverse, at the end of which a conductor cable is attached to a suspension insulator . Two types of guy masts are used, namely lattice masts , which are similar in their construction to the supporting masts and pole-like structures which are supported by two diagonal struts and, since they only carry one conductor, are always in pairs next to each other.

To the southwest of Kamennyy there is a section of the line where portal masts designed for three conductors are used, although there, as in its entire length, the line has only two conductors.

Course of the HVDC Volgograd-Donbass

The HVDC Volgograd-Donbass can also be operated single-pole with a return line via the earth , which is why there are two earth electrodes . Both electrodes are land electrodes, which consist of a 30 mm thick steel rod that is inserted into a hole filled with coke.

The electrode lines are installed on masts similar to those of the main line, but smaller. In contrast to the main line, all the guy masts of the electrode line are free-standing lattice masts with a traverse. As a rule, concrete masts with a single steel crossbeam are used as support masts. Lattice masts are only used for masts of exceptional height.

The Mikhaiilovskaya station electrode is located north of Smile. It is connected to the Mikhaiilovskaja converter station via a 32 km long overhead line with two ACSR conductors connected in parallel with a cross- section of 2450 mm 2 . The electrode line runs from Mikhailovskaja to Zolobok west of the main line. At Zolobok she crosses it and follows her on the other side to Krymske, where she leaves the main line and turns in a south-easterly direction to the electrode.

The electrode of the Volgograd converter station is located northwest of Kamennyy. It is connected to the converter station via a 24 km long overhead line with two parallel-connected ACSR conductor cables with a cross-section of 2450 mm 2 .

The converter station in Donbass area, the converter station Michailowskaja, is located northeast of Pervomaisk in Ukrainian province Luhansk at 48 ° 39 '13.0 "  N , 038 ° 33' 56.0"  O . As with the Wolschskaja converter station, 4 series-connected three-phase valve bridges are used for each pole, which form two series-connected twelve-pulse bridges. In 1977 the mercury vapor rectifiers in a valve bridge were also replaced by thyristors in this station. It should be emphasized that the direct current line crosses the entire three-phase switchgear before it reaches the converter hall on the south side of the system. The converter hall itself is 219 meters long and has a 54-meter-long wing that points in a south-south-west direction. The valves of the Mikhailovskaya converter station are connected to the 220 kV level via the converter transformers. The station has 3 harmonic filters that are 100 meters north of the switchgear and each of which supplies a reactive power of 132 MVA . ! 548.6536115538.565556548.653611111111 38.565555555556