HMS Dreadnought ( English for nothing to fear ) was a battleship of the British Royal Navy . The ship, which served in the British Navy from 1906 to 1920, was the first ship of the new dreadnought typenamed after himand is therefore considered to be the ancestor of all battleships of the 20th century. 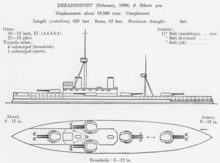 View and view of the dreadnought

The launch took place on February 10, 1906 in the Portsmouth naval shipyard . It entered service on December 3, 1906 and had no sister ships .

The Dreadnought , which was completed in just 427 days (and around 20% more expensive compared to the previous ships of the line ), is regarded as the first modern battleship due to its steam turbine drive and equipment with exclusively heavy main artillery of uniform caliber (all big gun one caliber battleship) . The devaluation of the older battleships that went along with their construction led to a worldwide naval battle that was only stopped by international treaties ( fleet conferences ) after the First World War . Two Mirrlees diesel engines, the first diesel engines on a British ship, were installed on the Dreadnought .

The Dreadnought was the flagship of the British Home Fleet from 1907 to 1909 and the flagship of the First Division from 1907 to 1911. In 1911 the ship was retrofitted. In 1914 it belonged to the Grand Fleet , but was removed from it again in 1916 due to its technical obsolescence and became the flagship of a squadron of older liners. The only fighting during the First World War consisted in the sinking of the German submarine SM U 29 under Otto Weddigen by ramming. In February 1919 the ship was assigned to the reserve fleet and decommissioned a year later. Then in May 1920 it was sold to a scrapping company for £ 44,000, which began scrapping in 1923.

A serious structural disadvantage of the dreadnought was the arrangement of the main mast with the artillery control post behind the first chimney: When the target was in leeward position, one's own chimney smoke could cover the enemy, and in the case of unfavorable flow conditions, visibility was impaired by sooting and heat nuisance.

In 1910, the ship became known through the dreadnought prank , in which Virginia Woolf and other members of the Bloomsbury Group visited the ship disguised as alleged Abyssinian diplomats.

There were eight other ships in the history of the British Navy that also bore the name HMS Dreadnought , including the first British nuclear submarine from 1963.

The following were named after the ship: