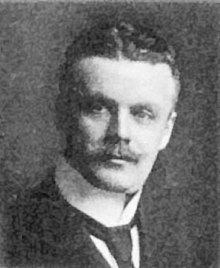 Hans Sachs was born as the son of the town school leader and later member of the state parliament, Leonhard Sachs . He studied law and political science in Tübingen , Leipzig and Berlin and meanwhile worked as editor of the national liberal National-Zeitung . During his studies he became a member of AV Igel Tübingen .

In 1906 Sachs became press officer in the Foreign Office , in 1909 a member of the government and in 1918, shortly before the fall of the Wilhelmine monarchy, he became a secret government councilor (of the emperor). In 1920 Sachs had to give up his job.

Sachs now joined Gustav Stresemann's German People's Party (DVP) and ran for the Reichstag in the Franconian-Nuremberg constituency in 1920 , but without obtaining a seat. After criticizing Stresemann's policy, Sachs then switched to the National Liberal State Party of Bavaria (NLLP), which he co-founded and emerged from the Bavarian DVP, and as its member he was able to move to the Reichstag from May 1924 (until September 1930).

In 1931 the NLLP went under , a few years before Hitler's successes . In 1933, Sachs ran for the NSDAP , but was not elected to the Reichstag as a list member. The relationship with the Nazi rulers remained diffuse from then on. An approval developed from the monarchist perspective on the one hand, and a rejection of the proletarian traits of the NSDAP on the other hand, made Sachs politically homeless. Shortly after the end of the war, Sachs died in Crailsheim. After the First World War, Sachs was in charge of the management of the Association for the History of Lake Constance and its Surroundings in Northern Germany.