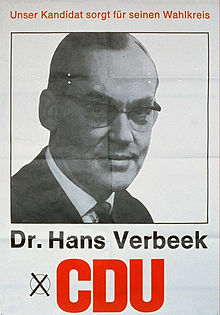 Poster for the 1965 federal election

After attending primary school and graduating from high school, Verbeek first studied law. However, he had to interrupt his studies, was drafted into the Wehrmacht and took part in the Second World War as a soldier from 1939 to 1945 . Most recently he was deployed as first lieutenant in the reserve and battery chief. At the end of the war he was taken prisoner. He later received the rank of major in the reserve in the Bundeswehr .

After his release from prisoner-of-war, Verbeek resumed his studies, which he completed in 1948 with the first state examination in law, and in 1949 with a doctorate in Dr. jur. and finished in 1951 with the second state examination in law. He then joined the administrative service of the state of North Rhine-Westphalia , was appointed to the district administrative council in 1953 and has been the senior district director of the Euskirchen district since 1957 . In Euskirchen , a special school for mental development was named after him. Since 1950 he was a member of the KDB Rheno-Silesia zu Düsseldorf in the RKDB .

Verbeek had been a member of the CDU since 1946. From 1954 to 1957 he was chairman of the CDU district association Euskirchen and was elected to the regional civil servants' committee of the CDU Rhineland in 1954.

Verbeek was a member of the German Bundestag from the 1965 federal election until his death. In parliament he represented the constituency of Bergheim .