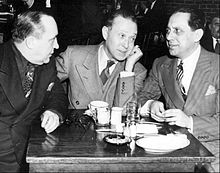 Langdon was born the son of the painter William Worley Langdon and his wife Lavinia. He grew up in Omaha and earned his pocket money as a newspaper seller, preferring to spend it on theater visits and the financing of his own amateur theater productions. As a teenager, Langdon ran away and joined the “Dr. Belcher's Kickapoo Indian Medicine Show ”. He kept leaving his family to join show groups. He showed himself to be very versatile, as an artist on the trapeze, clown or musician. Like his colleague Larry Semon , he was also a talented draftsman. In 1903 he married the actress Rose Musolff, with whom he started his career in vaudeville in 1906 . By 1915 he had developed the sketch "Johnny's New Car", which became famous and which he performed in ever new variations in the following years.

In 1923, Langdon decided to make a foothold in silent films . Harold Lloyd hooked him up with producer Hal Roach , but the negotiations went nowhere. Instead, he signed with Sol Lesser of Principal Pictures, for whom he directed the three short comedies The Skyscraper, A Tough Tenderfoot and A Perfect Nuisance . They were initially not performed, and due to financial problems with the studio, the comedian was fired that same year.

In November 1923, Langdon was signed by Mack Sennett . His earliest films for the studio mostly corresponded to the fast-paced slapstick typical of Sennett and were similar to those of Billy Bevan and Ben Turpin . But soon Sennett granted his new acquisition greater artistic freedom in order to be able to develop his own style, which first came into play in Shanghai Lovers and finally regularly from The First 100 Years . Langdon's film character now relied entirely on his expressive baby face, paired with typical childish mannerisms and limitless slowness, naivety and innocence: a helpless child man who in a complicated and hostile world is often luckier than brains.

Director Harry Edwards , who worked with Langdon in the years 1924 to 1926, contributed to the increasing artistic success of short film classics such as All Night Long, His Marriage Wow, Remember When ?, Saturday Afternoon, Soldier Man and Fiddlesticks (only published in 1927) as well as the first feature films His First Flame (ditto) and Tramp, Tramp, Tramp turned. At the end of 1924, Frank Capra and Arthur Ripley, two sensitive gag writers and authors, were added, while character actor Vernon Dent became Langdon's most important actor in the films as the "straight man". Sennett had also acquired the three Lesser films, at least two of which he released in theaters among other titles ( Horace Greeley, Jr. and The White Wing's Bride ).

Tramp, Tramp, Tramp (1926) was created after Langdon's departure from Sennett, in-house for First National . This and the subsequent feature film The Strong Man (1926) were artistic and commercial successes that cemented Langdon's status as an important comedian and critic's favorite. The Strong Man was first directed by Frank Capra and is considered Langdon's best feature film. In 2007 it was rated "culturally, historically, or aesthetically significant" and was listed in the United States National Film Registry of the Library of Congress .

During the shooting of the next feature film Long Pants (1927), there were constant differences of opinion between director Capra on the one hand and Langdon and author Ripley on the other, which ultimately led to Capra being kicked out. A controversial sequence in which the protagonist wants to kill his former love (a parody of Dreiser's An American Tragedy ) alienated the audience and the film was not a success. Langdon decided to direct in the future, but the pathetic Three's a Crowd (1927), the bizarre The Chaser (1928) and the now-lost Heart Trouble (1928) turned out to be bitter flops at the box office and ended the great years of the Comedian.

After Langdon was forced to return to the stage for a few months, he was able to sign a contract with Hal Roach Studios in the breakthrough year of the talkies. In 1929/30 eight short films were made there, which were Langdon's first sound films. Contrary to a popular legend, the comedian was not fired by Roach afterwards, but rather threw in the towel due to the tense work atmosphere. That Langdon 1930, more prestige possessed adopted as often, also show his starring roles in two feature films: In Warner's A Soldier's Plaything (directed by Michael Curtiz ), he played a sidekick of Ben Lyon and Universal See America Thirst in a duo with Keystone - Veterans Slim Summerville . All of these films were unsuccessful with paying audiences.

Persistent failures and personal problems finally brought Langdon's film career to a standstill for two years from late 1930 to late 1932. His other short films of the 1930s and 1940s were quick and cheap off-the-peg comedies that were made successively for Educational (1932/33, eight films), Paramount (1933/34, five films) and, above all, Columbia (from 1934). Several of these films brought Langdon back together for the first time since the Sennett days with Vernon Dent, who became his best friend in personal life. Some of the Columbia short films such as I Don't Remember, A Doggone Mixup or Cold Turkey are successful comedies in their own way, but Langdon's film character at that time had little in common with the character from the silent films. As a supporting actor, the comedian continued to act in feature films in various studios, especially with a highly acclaimed performance in the Al Jolson musical Hallelujah, I'm a Bum (1933).

From 1938 Langdon also worked for the comedian duo Laurel & Hardy as a gag writer for their films Block-Heads (1938), The Flying Deuces (1939), A Chump at Oxford and Saps at Sea (both 1940). In Roach's southern comedy Zenobia (1939) he even appeared in front of the camera with Oliver Hardy , which ultimately gave rise to unfounded rumors that the Laurel & Hardy team had split up.

Zenobia was successful enough to make Langdon the star of three feature films for the Poverty Row studios PRC and Monogram : After Misbehaving Husbands (1940), he appeared twice in a duo with the in Double Trouble (1941) and House of Errors (1942) Comedian Charley Rogers as the brothers Bert and Alf Prattle. Rogers is best known as the writer, director and supporting actor for Laurel & Hardy and had directed some of the earliest Langdon talkies for Roach in 1929/30.

After a short second marriage in 1929, which was partly responsible for his declaration of bankruptcy in late 1931, Langdon had married Mabel Sheldon in February 1934 as a third marriage. At the end of the same year he had become the father of a son, the later famous celebrity photographer Harry Langdon Jr. Ten years later, at the age of 60, he died of a cerebral haemorrhage. He is buried in the Grand View Memorial Park Cemetery in Glendale , California. He has a star on the Hollywood Walk of Fame (6925 Hollywood Boulevard), and his birthplace Council Bluffs has had Harry Langdon Boulevard since 1999.

In his autobiography "The Name Above the Title" from 1971, Frank Capra portrayed Harry Langdon as an unworldly, self-loving and allure-laden fool who never understood the character he was portraying. He owed his short-lived commercial success entirely to Capra and his art of characterization, which was only confirmed by Langdon's immediate decline after his mentor's dismissal. This expression of opinion by Capra, which he repeated again in 1980 in the television documentary Hollywood (Episode 8: Comedy - A Serious Business ), was repeatedly adopted and reproduced as an unquestioned "fact" by film historians in the following decades. It is only recently that there have been increasing voices that assess the statements as part of a protracted character assassination campaign by the later star director, who was later insulted by Langdon in his honor: Capra had mobilized various film columnists against the comedian as early as 1927, shortly after Langdon had fired him It hurt Langdon's career. Due to the availability of most of the early Langdon films, it has now been proven that the comedian had already perfected his character as far as possible before Capra joined him; furthermore, its decline had already begun under his direction, with Long Pants .

In his famous article "Comedy's Greatest Era" for Life magazine in 1949 , film critic James Agee first put Harry Langdon on par with Charlie Chaplin , Buster Keaton and Harold Lloyd and wrote of the "big four" of silent film comedy. However, this thesis did not go unchallenged: On the one hand, Langdon's film character is less “mass-compatible” than that of the other three great comedians and not only arouses ardent admiration but also a lack of understanding among some viewers. On the other hand, Langdon’s feature-length films, with the possible exception of The Strong Man, hardly come close to the masterpieces of these colleagues. Fatty Arbuckle (comedian, trend-setting comedy director, his own author and Keaton's teacher in personal union) today has, in the opinion of many, a similarly high claim to a place in the Olympus of silent film comedians.

Langdon's importance as one of the greatest pantomimes of all time, his originality and his great influence on film comedy are undisputed . He revolutionized film comedy through the discovery of slowness and thus did pioneering work on the z. B. could build the more famous Laurel & Hardy.

Films that have been lost or that have only survived as short fragments are marked with an asterisk.