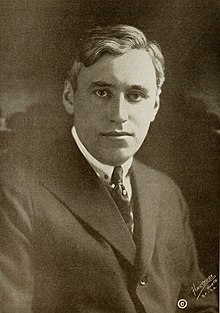 Mack Sennett , actually Michael Sinnott , (born January 17, 1880 in Richmond , Québec , † November 5, 1960 in Woodland Hills , California ) was an American film producer, director and actor. In total, he produced over 1100 films in the silent and early talkies era, most of which have been lost. In film history he is considered the father of slapstick comedy in Hollywood. In 1938 he was awarded an honorary Oscar for his significant contributions to early film comedy .

Mack Sennett grew up in Canada as the son of Irish immigrants. His father was a blacksmith, he had two brothers and a sister. In 1897 the family emigrated to the USA, where they initially lived in Connecticut and then in Massachusetts . Sennett junior initially earned his living as a steel worker, but dreamed of a career as an opera singer. In 1902 he met the actress Marie Dressler , who encouraged him to pursue an artistic career . She referred the young man to the theater producer David Belasco in New York , whereupon he was able to gain a foothold in Vaudeville .

From 1908 Sennett worked for the New York Biograph Company , where he learned the film trade from scratch under David Wark Griffith : he worked as an outfitter , actor , comedian and finally as a director . Soon he specialized entirely in comedies, working with Mabel Normand , among others , who not only proved to be a capable comedian but also became his lover (the relationship broke up in 1915 and Sennett remained a bachelor for the rest of his life). The best-known short film with Sennett himself as the leading actor is now the biographical comedy The Curtain Pole , which was made in 1909 under the direction of Griffith himself.

In 1912 Sennett founded his own company, Keystone Studios , with former bookmakers Adam Kessel and Charles Bauman , the first stars of which were his biographical "souvenirs" Normand, Fred Mace and Ford Sterling, as well as himself. The Keystone's first two short films, The Water Nymph and Cohen Collects a Debt premiered on September 23, 1912, the former is still in existence today. Sennett's trademark slapstick films with exciting and - for the actors too - breakneck stunts that were often used in wild chases.

Fatty Arbuckle , Al St. John , Edgar Kennedy , Hank Mann , Minta Durfee , Chester Conklin , were among the other stars and supporting actors who were brought on board by Sennett over the next five years and who helped shape the Keystone sometimes longer, sometimes shorter . Mack Swain , Charley Chase (then still Charles Parrott), Charlie Murray , Slim Summerville , Alice Howell , Syd Chaplin , Louise Fazenda , Harry Gribbon , Polly Moran , Mae Busch , Harold Lloyd (who left the studio pretty quickly because Sennett was there Didn't want to recognize star potential), Tom Kennedy , Raymond Griffith , Gloria Swanson , Bobby Vernon , Wallace Beery , Billy Armstrong and Ben Turpin . They were all surpassed by Charlie Chaplin , who created his tramp figure at Sennett in 1914 and thus made his way into Hollywood. After Chaplin quickly became a star with his Keystone films, he left the studio after less than a year.

The Keystone Kops , a group of idiotic police officers who appeared in various casts in countless films of the studio and was often part of the mandatory car chases , also achieved great fame . Sennett's former patron Marie Dressler made a one-off guest appearance when he made her the title heroine of his most ambitious project to date: Tillie's Punctured Romance with Chaplin and Normand in other leading roles was the first full-length film comedy in the United States in 1914.

Directors from the early days of the studio were next to Sennett u. a. Henry Lehrman , George Nichols and Wilfred Lucas , all of whom worked for Keystone until 1914 (Lehrman soon afterwards founded his own film company L-KO ). In the same year, Keystone's most important comedian stars were entrusted with directing their films, starting with Mabel Normand and Ford Sterling, which did not detract from the quality. Ultimately, Arbuckle and Chaplin, both of whom began directing in April 1914, became the studio's greatest masters, including behind the camera.

In 1915, Keystone Studios became part of Triangle Films , founded by Sennett, DW Griffith and Thomas Ince to join forces. At that time, Oh, Mabel Behave! Another feature-length film with Keystone stars, which was not released until 1922 and as a triangle film.

In 1917 Sennett left Keystone to form the Mack Sennett Comedies Corporation. The Sultan's Wife is the last Keystone comedy, and A Bedroom Blunder is the first Mack Sennett Comedy . The main stars taken over by Keystone were Ben Turpin (who was just making it big), Louise Fazenda, Ford Sterling, Charlie Murray, Harry Gribbon and Billy Armstrong, to which newcomers like Heinie Conklin , James Finlayson , Billy Bevan , Andy Clyde joined , Kewpie Morgan , Sid Smith , Vernon Dent , Bud Jamison , Louise Carver , Sunshine Hart , Daphne Pollard and Franklin Pangborn . Sennett achieved a special coup in 1924 with the acquisition of Harry Langdon , whose film career he started, but which - like Chaplin a decade earlier - he was unable to keep for long. Important directors of the studio were Edward F. Cline , F. Richard Jones (both active for Sennett in the Keystone days), Del Lord , Harry Edwards and Roy Del Ruth , the authors included Frank Capra and Arthur Ripley , who were mainly for wrote the Langdon films.

Sennett's provocatively lightly clad bathing beauties , who were used as early as 1915, still at Keystone, first as a publicity stunt for press photos and then sporadically in films , also became famous . They were given more space in the Mack Sennett Comedies, and several of the actors became stars of the studio over the years. In fact, some former bathing beauties were able to convince not only with their beauty, but also as real comedy talents. B. Marie Prevost , Phyllis Haver , Kathryn McGuire , Madeline Hurlock , Thelma Hill , Marjorie Beebe and the most famous of them all, Carole Lombard . She took her first steps as a comedian at Sennett in 1927 and later described this phase as the turning point of her career.

In addition to countless short films, the Mack Sennett Comedies Corporation also produced a total of 15 long film comedies with running times of around 45 to 90 minutes. a. three times Mabel Normand, three times Ben Turpin and once Harry Langdon. The best-known of these today is the Normand comedy The Extra Girl (1923), but Sennett had by far his greatest hit as early as 1918: the full-length Normand film Mickey , whose shooting had already started in Keystone times before it became the only production by Sennett's short-lived Mabel Normand Feature Film Company was the biggest box office hit in film history until 1937.

Sennett made the leap to sound film before his rival Hal Roach , starting with the short The Lion's Roar in December 1928. In the early 1930s, he helped Bing Crosby with several short films to his first leading roles in comedies. His last major achievement as a producer was the four celebrated two-act films with which WC Fields perfected his character in 1932/33. Despite such individual successes, the studio began to decline in the late 1920s, due to poor financial decisions and the inability to adapt to changed public tastes. In November 1933, Sennett had to file for bankruptcy. 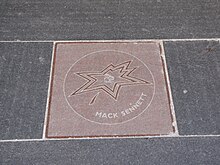 Subsequently, the comedy producer largely withdrew from the film business, but without being forgotten. Among other things, Mack Sennett was awarded an honorary Oscar in 1938 and also made a cameo appearance as himself in the comedy Abbott and Costello Meet the Keystone Kops (1955). Until his death he was widely known as the " King of Comedy ". Even today he is still considered the father of slapstick comedy in film history. Mack Sennett died at the age of 80 on November 5, 1960 in Woodlands Hills, California.

He was honored with stars on the Hollywood Walk of Fame and Canada's Walk of Fame for his film work . In Richard Attenborough's film Chaplin (1992) Mack Sennett was played by Dan Aykroyd .