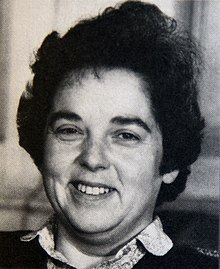 Heidi Deneys (born May 25, 1937 in Saint-Imier ; † November 21, 2014 in La Chaux-de-Fonds ; entitled to live in Röthenbach in the Emmental ) was a Swiss politician ( SP ), a national councilor from Neuchâtel and the first woman president of a cantonal party in Switzerland.

Heidi Oppliger, daughter of Paul Oppliger, farmer, and Tanner, born Louise, farmer and seamstress, spent her school days on Mont-Soleil and Saint-Imier and graduated in 1957 with a commercial school-leaving certificate in Neuchâtel. After Oppliger graduated from the University of Neuchâtel in 1959 with a degree in social sciences, she taught at secondary school in Saint-Imier from 1960 to 1961 and in Tunisia and Niger from 1961 to 1964 . Her stay in Africa was due to the Bizerte crisis in the summer of 1961, a war between France and Tunisia, when French-speaking teachers of non-French origin were wanted in North Africa. From 1965 she taught geography and political science at the secondary school in La Chaux-de-Fonds. Her marriage to Walter Deneys, a teacher from Belgium whom she had met in Tunisia, had two children. In 1967 the couple divorced.

From a young age, Deneys had been sensitized to women's issues and rights by her mother . In 1959 she joined the Neuchâtel movement Nouvelle gauche socialiste , which strived for democratic socialism , but only lasted from 1958 to 1963. Here she met René Meylan , Raymond Spyra and Pierre Dubois. In 1969 she joined the Neuchâtel Social Democratic Party (SP) and presided over it from 1972 to 1976, making her the first woman to head a cantonal party. At the national level, Deneys worked as Vice President with Helmut Hubacher from 1986 to 1990 and as Central Secretary for Western Switzerland with Peter Bodenmann from 1990 to 1997 . 1972–1976 and 1988–1990 she worked as a general councilor in La Chaux-de-Fonds ( legislature ), 1973–1981 and 1989–2001 as a major councilor in Neuchâtel and from 1977–1987 as a national councilor. In the federal parliament, Deneys was a member of the military commission, the petition commission, the commission for science and research, the commission for the revision of the marriage law and presided over the commission for health and environment as well as the business audit commission. She was committed to the introduction of community service, the reduction of military spending, funding of research, equality between men and women and the right to abortion. In addition, she dealt with economic issues such as the support of innovations for small and medium-sized enterprises or the promotion of peripheral regions.

Deneys was also a member of the expert commission for human genetics at the same time as Eva Segmüller and Lili Nabholz- Haidegger and presided over the cantonal supervisory board of the psychiatric clinic in Perreux . She also stood up for the interests of pensioners and older people, namely 1994–2006 as Vice-President of the Board of Trustees of Pro Senectute , 2003–2012 as President of the Neuchâtel section of the Association for the Defense of the Rights of Pensioners (Avivo) and 2004 –2006 together with Angeline Fankhauser as co-president of its umbrella organization, the Association of Active Seniors and Self-Help Organizations in Switzerland (Vasos).