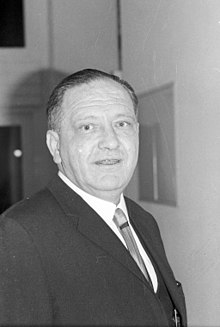 Heinrich Kraft (born July 1, 1918 in Darmstadt , † March 21, 1998 in Kiel ) was a German Protestant theologian. He taught theology (church history) in Heidelberg and Kiel and as a guest at numerous domestic and foreign universities.

In the years 1937–1939, Kraft studied chemistry in Darmstadt. Shaped by his experiences in the Second World War, in which he participated from 1939 to 1945 , he switched to theology, which he began studying at the Ruprecht-Karls-Universität Heidelberg in 1945 and graduated in 1948 with the 1st theological exam. He then became assistant to Baron Hans von Campenhausen , with whom he received his doctorate in 1950 on the subject of studies on the forms of community and life of heretical and Christian gnosis of the second century .

His habilitation followed in 1954 with a habilitation thesis on Emperor Constantine's religious development . In 1958 he was appointed associate professor for church and dogma history at the Christian Albrechts University in Kiel. In 1963 he switched to a full professorship, which he held until his retirement in 1983. Until 1984 he still represented his chair.

In 1957 Kraft was a co-founder of the Patristic Working Group, which is still internationally active today, for research into the history of Christianity in the first centuries. In 1959 he received an honorary doctorate from the Ruprecht-Karls-Universität Heidelberg. Kraft's main interests were New Testament topics and Christianity in the first centuries after Christianity. He was also an eminent expert on the Coptic language.