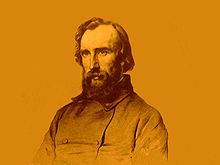 Amiel was the first son of the businessman Henri Amiel and his wife Caroline Brandt. The Amiel family originally came from France and had been entitled to reside in Geneva since 1791. After the death of his parents, he was taken in by his uncle Frédéric Amiel at the age of 13. After starting his studies in Geneva, he traveled to Switzerland, Italy , France and Belgium . In Germany he stayed in Heidelberg for nine months ; from 1844 to 1848 he lived in Berlin , where he studied philosophy (with Schelling ), psychology (with Beneke ) and philologyand studied theology .

In 1849 he returned to Geneva and became professor of aesthetics and French literature at the University of Geneva thanks to a treatise on Du Mouvement littéraire dans la Suisse roman [d] e et de son avenir (The literary movement in French-speaking Switzerland and its future). From 1854 until his death he also held the chair for philosophy.

Amiel published several volumes of poetry, historical and philological studies and philosophical essays that are influenced by idealistic German philosophy . The most popular work he published during his lifetime was the patriotic-militarist song Roulez, tambours! (1857), which dealt with the feared intervention by Prussia in Neuchâtel .

Amiel became famous with his monumental diary ( Journal intime , 17,000 pages from 1839 to 1881), which was discovered after his death. The two-volume excerpts published shortly thereafter caused a sensation because of the clarity of thought, the sincerity of introspection, the accuracy of the details, the discouraging vision of existence and the propensity for severe self-criticism. At the end of the 19th and beginning of the 20th century, the diaries influenced writers in Switzerland, but also elsewhere in Europe (e.g. Leo Tolstoy , Fernando Pessoa , Hugo von Hofmannsthal ).

Amiel's grave is still in the Clarens cemetery in Montreux on Lake Geneva.