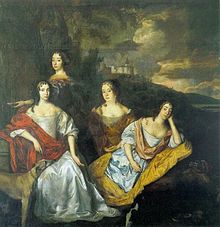 The daughters of Friedrich Heinrich of Orange , governor of the Netherlands 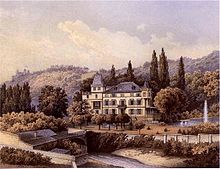 Henriette Amalie Princess of Anhalt-Dessau (* December 7, 1720 in Dessau ; † December 5, 1793 ibid) was the youngest daughter of Prince Leopold I of Anhalt-Dessau from the house of the Ascanians and Anna Luise Föhse .

Her grandmother Henriette Catharina von Oranien-Nassau (1637-1708) was a Dutch princess from the House of Orange , who in 1659 married the grandfather Johann Georg II of Anhalt-Dessau . As a princess she participated in the construction and development of the relatively poor principality. In 1660 the village of Nischwitz received it as a personal property, which was renamed Oranienbaum in 1673 in memory of its origins . From 1683 she had the city, park and Oranienbaum Palace built here as her personal residence. After the death of her husband Johann Georg II. In 1693, she had Oranienbaum Castle expanded into a widow's residence, which she lived in until her death. The couple had several children, including their father Leopold I and his sister Princess Henriette Amalie von Nassau-Dietz (1666–1726). Her aunt of the same name was born Princess of Anhalt-Dessau, who married Prince Heinrich Casimir II of Nassau-Dietz (1657–1696). Princess Henriette Amalie inherited not only important Dutch paintings from the estate of her mother Henriette Catharina, but also Oranienstein Castle , the shape of which she significantly shaped and which the architect Daniel Marot designed in baroque style between 1704 and 1709 . She was also the namesake of her niece and daughter of her brother, Henriette Amalie von Anhalt-Dessau (1720–1793), who is often confused with her because of her identical name. She seems to have inherited not only the name, but also her sense of art, her passion for collecting and her management skills from her grandmother and aunt.

In 1741, when she was 21, she gave birth to the illegitimate boy Heinrich August, the nine-year-old son of the hunting equipment master Wilhelm Gustav Werner, and refused to marry the child's father. This led them into exile. For the next eleven years she lived as a canon in a free world women's monastery in Herford . Her father Leopold I, who had two illegitimate children himself, continued to try to marry his daughter appropriately, but all marriage plans failed. During this time, she lived with Baron von Rackmann, who was fifteen years younger than her, who was raised to the imperial baron status as Baron von dem Bangardt through her intervention in 1788 . The name Bangert (= tree garden) was borrowed from the Kreuznach name of the Bangert manor , derived from its numerous fruit trees.

Presumably in order to be close to her son, who had been taken into care by a Frankfurt banking family, she first acquired a large property in Bockenheim near Frankfurt , which later became the Villa Passavant , then the former Francke School and finally today's St Elisabethen Hospital were built. She used the courtyard building as a residence for several years in order to supervise the completion of her so-called castle, which she acquired in 1753. After the princess's death, this first property served as a retirement home for her long-time lover, before it was sold in 1804 to the banker Johann Georg Meyer, who then sold it to Samuel Passavant in 1820. In 1938 the city of Frankfurt acquired the property and built the former Francke School. Today only a few fragments of the wall on Ginnheimer Strasse and the garden villa of the Passavant family built by Friedrich Christian Hess in 1829 (today used as the kindergarten “Die Arche” of the St. Elisabethen Hospital) remain from this property.

In 1753 the princess bought an estate which included a stately home and an orangery . She had extensive agriculture and soon became the largest landowner in Bockenheim by buying and leasing all the large estates in Bockenheim. She introduced sericulture , kept bees, pressed cider and sold oranges from her greenhouses. She had asparagus crops, fruit and vegetable plantations as well as mulberry plantations for her silkworms and arranged for sheep and cattle to be raised on her estates.

Commemorative plaque at the current entrance to Von Bernus Park

In 1771 she also acquired a property in Kreuznach , which was later named Rittergut Bangert after her partner, Baron von Bangert. After her death in 1793, Andreas van Recum (1765–1828) acquired this property in 1802 . The property in its current form is also known as the Puricelli Castle and today houses the Castle Park Museum in Bad Kreuznach's KulturViertel. A large portrait of the princess in this museum testifies to & a. still today of their stays and property rights in Kreuznach.

In Kreuznach, the princess not only acquired the Bangert manor, but also noble houses from the 17th century such as the Simmerner Hof, the Kronenberger Hof and in 1766 became the owner of the Hundheimer Hof, which was then called Dessauer Hof and which is now the Lord Mayor and reside his own office. With the model estate, Domain Bangert, she proved herself to be an innovative agricultural entrepreneur. Her investments in Kreuznach cannot be explained without reference to her emotional family ties, especially to her grandmother Henriette Catharina von Oranien-Nassau (1637–1708) and aunt Henriette Amalie von Anhalt-Dessau (1666–1726). She also wanted to manifest her bond with the House of Orange and to resume the tradition of Marie von Oranien-Nassau (1642–1688), who died in Kreuznach, who had temporarily resided in this property during the summer months.

Main residence in Bockenheim near Frankfurt am Main

The princess manages her extensive property in Bockenheim herself, not through administrators. She was an enthusiastic farmer, open to reforms and meticulous about accounting. Through economical management and financial foresight, she created the basis for an independent and befitting life. It was said of her that she was five times as rich as the richest local farmer. With her fortune, she supported numerous artists by purchasing their works.

In 1771 she expanded her country house with additions to the castle. The nearly 700 works of art found a place in the “gallery” on the first floor of the building. A “marble bathroom” was built next to the castle.

In 1790 she acquired a prestigious Frankfurt town house on Grosse Eschenheimer Gasse .

Before the French revolutionary troops approached in 1792 and General Adam-Philippe de Custine conquered Frankfurt on October 27th, Henriette Amalie fled with her belongings to her hometown Dessau and moved into the Palais Dietrich , one of her father's for his son Dietrich (the had already died in 1769), where she died a year later. In Dessau she was buried without the family being present.

Her legacy: the Amalia Foundation

After her death, her property was transferred to the Amalienstiftung, which was supposed to take care of the needy in Dessau. The areas of the collection could only be made accessible to the public to a limited extent, as they, like their natural objects collection, were very extensive. With over 4,000 volumes, it had a considerable library with the most important works of intellectual history, natural history and fiction. The Anhaltische Gemäldegalerie Dessau still keeps 482 of its more than 700 paintings. The written records of the Amalienstiftung can be found in the Dessau department of the Saxony-Anhalt State Archives .

Your so-called "Bockenheimer Schlösschen" was destroyed by air raids on September 12, 1944. A large apartment building was later built there. Only remnants of the former castle park remained. a. reduced in size by new road and residential construction, now called Von-Bernus-Park . The memory of Henriette Amalie Princess of Anhalt-Dessau is reduced today to references in the plaque at a newly created entrance area of ​​her former palace park.