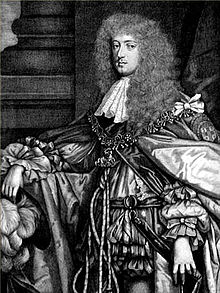 Coat of arms of Henry Somerset, 1st Duke of Beaufort

Henry Somerset was born at Raglan Castle as the eldest son of Edward Somerset, 2nd Marquess of Worcester , and his first wife Elizabeth Dormer. As his father's apparent marriage , he carried the courtesy title of Lord Herbert from 1646 .

In 1660 he joined the English army as a colonel in an infantry regiment. In 1660 he was elected Knight of the Shire for Monmouthshire in the House of Commons . He was also Lord Lieutenant of Monmouthshire, Herefordshire and Gloucestershire from 1660 to 1689 . In 1661 he became a colonel in a cavalry regiment. In 1663 he completed his studies at Oxford University as a Master of Arts . When his father died on April 3, 1667, he inherited his title of nobility as 3rd Marquess of Worcester , 7th Earl of Worcester and 9th Baron Herbert . He received a seat in the House of Lords and left the House of Commons.

He held the office of Lord President of Wales and was accepted as a Knight Companion in the Order of the Garter in 1672 and on April 22, 1679 in the Privy Council .

As a descendant of John of Gaunt , he was related to the Stuart royal family and supported the Stuart Restoration . For his services, King Charles II made him Duke of Beaufort on December 2, 1682 . After the Glorious Revolution , Somerset refused to give King William III. the oath of allegiance.

Somerset's son Charles died before he could inherit his father's titles; the dignity therefore passed to his son Henry .