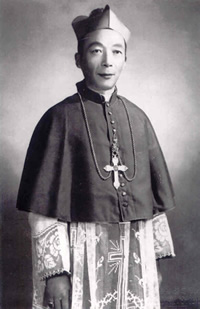 Ignatius Kung Pin-Mei received the sacrament of priestly ordination on May 28, 1930 after theological and philosophical studies in Shanghai . He then worked as a parish priest and teacher in the diocese of Shanghai.

In 1949 he was appointed by Pope Pius XII. Bishop of Suzhou (Jiangsu) and he received on 7 October 1949 by the apostolic nuncio in China and later Cardinal Antonio Riberi the episcopal ordination . In 1950 the Pope made him head of the diocese of Shanghai and entrusted him with the administration of the dioceses of Suzhou and Nanjing . In 1955 he was arrested by the communist rulers and sentenced to life imprisonment in 1960. In 1985 he was released from prison and placed under house arrest, and in 1988 he was allowed to travel to the USA. As early as 1979 Pope named him John Paul II. In pectore the Cardinal , was performed with the public proclamation in 1991, the inclusion in the College of Cardinals as Cardinal Priest with the titular church of San Sisto .

Ignatius Kung Pin-Mei died on March 12, 2000 at the age of 98 in Stamford, Connecticut and was buried in the Santa Clara Mission Cemetery in Santa Clara , California . Since 1993 he was the oldest member of the College of Cardinals.