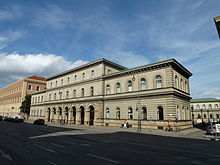 Headquarters of the Institute for Bavarian History

The Institute of Bavarian History of the Ludwig-Maximilians-University of Munich is a central national historical teaching and research facility in Bavaria . It is located on Ludwigstrasse in Munich in the wing of the Bavarian Main State Archives and in the immediate vicinity of the Bavarian State Library .

At the institute, the history of Bavaria from the early Middle Ages to the most recent contemporary history is researched and taught in close cooperation with non-university institutions such as the Commission for Bavarian State History at the Bavarian Academy of Sciences , the Bavarian State Archives and the House of Bavarian History . It organizes lectures and colloquia, issues its own publications, and supports talented students and graduates. The institute also advises government agencies and the public on issues of Bavarian history and culture.

The institute is a central facility of the Ludwig Maximilians University. It is headed by the two professors of regional history at the LMU (currently Ferdinand Kramer and Dieter J. Weiß ) and the General Director of the Bavarian State Archives (currently Margit Ksoll-Marcon ) and supported by a board of trustees that the Former director of the Bavarian Broadcasting Corporation, Prof. Albert Scharf , is in charge and includes, among others, Duke Franz von Bayern , Minister of Education Ludwig Spaenle , Hildegard Kronawitter and the former Federal Minister of Finance Theo Waigel . The institute's alumni have come together in the Society of Munich State Historians ; the company awards the Michael Doeberl Prize to outstanding graduates every year . The Eginhard and Franziska Jungmann Foundation and the Michael Doeberl Foundation also support the institute.

As early as 1898, Germany's first chair for regional history was established at the Ludwig Maximilians University and was occupied by Sigmund von Riezler . The following chair holders were Michael Doeberl , Karl Alexander von Müller and, since 1946, Max Spindler .

After the end of the Second World War, Spindler and the Bavarian Prime Minister Wilhelm Hoegner initiated the establishment of an Institute for Bavarian History, which the university and state government finally established officially on February 28, 1947. With the regional historical research and the scientific training, the institute was supposed to “create an intellectual and cultural foundation for the new Free State”. Bavarian history was researched more intensively in its European network.

Spindler was followed as professor and head of the institute by Karl Bosl , Andreas Kraus , Walter Ziegler and, since 2003, Ferdinand Kramer . In 1974 an additional chair was established and occupied by Friedrich Prinz ; He was followed in 1998 by Alois Schmid and in 2011 by Dieter J. Weiß . The professorship for Middle and Modern History of Wilhelm Störmers was assigned to the institute from 1978 to 1993, as was the chair for didactics of the history of Hubert Glazers and Hans-Michael Körners from 1977 to 1999. After the dissolution of the Institute for Bavarian Literary History at LMU in In 2000, Dietz-Rüdiger Moser's chair for Bavarian cultural history was also a member of the institute until he retired and was not again filled in 2004. As a result of the organizational reform of the Ludwig-Maximilians-Universität since 2002, the institute was reorganized as the university's central scientific institution and teaching was integrated into the LMU's history department as a department for Bavarian history.

The research work of the institute resulted in a wide range of important standard works on Bavarian history, such as the Handbook of Bavarian History (the so-called "Spindler"), the Bavarian History Atlas , the Historical Atlas of Bavaria , the Handbook of Historic Places, Bavaria or the new online project Historisches Lexikon Bayerns . The current research focuses are advanced in various scientific studies:

In addition, the institute publishes the Munich historical studies , research on state and regional history , source texts on Bavarian history and the series Bavarian State History and European Regional History at irregular intervals . With around 30,000 volumes, the institute's library is the leading reference research library on Bavarian regional history and also stocks literature on the history of European regions.