The title of this article is ambiguous. Further meanings are listed under Jingtai (disambiguation) . 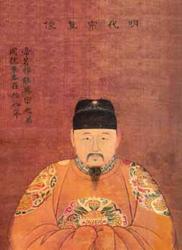 Jingtai ascended the throne after his older brother, the reigning Emperor Zhengtong, in the Battle of Tumu captured in 1449 and by the Mongols as a hostage was being held. His brother was released after only one year of imprisonment because Jingtai made him useless. Even so, Jingtai saw himself as the rightful emperor and imprisoned his older brother and his family. He also imprisoned the hereditary heir to the throne and instead named his own son as heir. He only granted the former Zhengtong Emperor the rather provisional title of "Great Emperor".

Jingtai was largely directed by the able Minister Yu Qian. With his advice he devoted himself to the empire. He had the Kaiserkanal repaired, the Yellow River equipped with better dykes and the economy promoted. As a result, the power of the Ming Dynasty was re-established. In 1457 he fell seriously ill and was in mortal danger. After his son had recently died under mysterious circumstances, he refused to appoint a new heir. In this situation, his arrested brother Zhengtong named himself his successor and simply deposed his brother in a palace revolt. Zhengtong ascended the throne again, this time under the name Tianshun.

Jingtai died a few months later, probably murdered by his own eunuchs , on the orders of the Tianshun emperor. Jingtai was considered a usurper and was not granted an honorable burial as an emperor. His brother did not have him buried in the imperial Ming tombs north of Beijing , but outside the burial area. He got a simple prince's grave, while the emperor mausoleum he had begun was later used for Emperor Taichang .