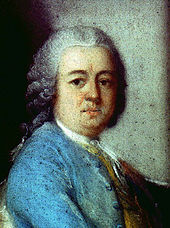 His father was the organist and cantor Jacob Bach (1655-1718). Johann Ludwig had two sons, Samuel Anton and Gottlieb Friedrich , who worked as organists and pastel painters in Meiningen. Their descendants are still alive today. He was distantly related to Johann Sebastian Bach (1685–1750) and was very much appreciated by him as an artist.

From 1688 to 1693 Johann Ludwig attended grammar school in Gotha , from 1699 he worked as a " hoboist and Laquay " at the Meininger Hof, where he probably received further composition lessons from the conductor Georg Caspar Schürmann . From 1703 he served as a cantor and page teacher. In October 1706, Bach applied in vain for the position of cantor at the Georgenkirche in Eisenach, previously held by Andreas Christian Dedekind († 1706). From 1711 he headed the Meiningen court orchestra as Kapellmeister, after having been " Capell Inspector " from 1709 , as such he was responsible for the administration of the instruments and the composition of secular works.

Little of his works has survived. The fact that two masses and 24 cantatas have survived is thanks to Johann Sebastian Bach, who performed 18 cantatas by his Meininger cousin in Leipzig in 1726 and composed seven further texts from the Meiningen cantatas of 1719. The cantata Because you will not leave my soul in hell , which is listed as BWV 15 , was previously considered a work by Johann Sebastian Bach, but is now generally attributed to Johann Ludwig Bach.

A systematic catalog of works is not available. The works are numbered in the order in which they were discovered.

Of the instrumental pieces that Johann Ludwig must have composed in large numbers as Kapellmeister, only the overture A 4 in G major from 1715 and a concerto for 2 violins and strings in D major have survived.

Cantata "Those sow with tears" for 4 solo voices, choir and orchestra

The 11 traditional motets are usually for two choirs with 4 voices (SATB) and basso continuo. They were in two edited volumes in the Duchess Anna Amalia Library :

Johann Sebastian Bach performed 18 of the 22 church cantatas by Johann Ludwig Bach known today between February and September 1726 in Leipzig. They belong to the older cantata type without madrigal poetry. The text templates are based on the scheme

The line-up is usually a four-part choir and strings, occasionally also with two oboes , a cantata has two horns.

There is also a funeral music for the funeral of Duke Ernst Ludwig in 1724, the text of which was written by the Duke himself and which is considered the most ambitious of JL Bach's surviving compositions. It has an unusually rich line-up: 2 four-part choirs, 3 flutes, 2 oboes, bassoon, 2 trumpets, timpani, strings and basso continuo.