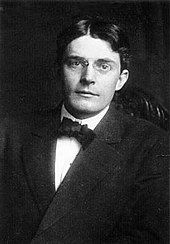 Watson came from a rural area in the US state of South Carolina. After a teacher training and a year as a school principal, he enrolled at the University of Chicago to study the philosophical foundations of education. Watson (after Buckley) was soon frustrated by the course content: He simply could not understand what his professors (including John Dewey ) were saying. So he preferred to attend courses in biology . After completing his doctorate in 1903 (he was the youngest student in the history of the University of Chicago to receive a Ph.D. ) he stayed at the university and did research in the field of neurophysiology . Watson received a professorship in experimental and comparative psychology in 1908 and at the same time the management of the psychological laboratory at Johns Hopkins University , which he held until 1920. In 1917 he was elected to the American Academy of Arts and Sciences . In 1920 Watson lost his professorship due to a relationship with an employee that had become public. Until 1945 he worked in advertising psychology .

Watson is considered to be the first to use the terms “behaviorism” and “behaviorist” (in his seminal article “Psychology as the behaviorist views it” from 1913). The form of behaviorism advocated by Watson is commonly referred to as classic stimulus-response behaviorism. He took the position that the appropriate subject of study in psychology is behavior, not mental, subjective or conscious experience. He defined psychology as a natural science of behavior:

“Psychology as the behaviorist views it is a purely objective experimental branch of natural science. Its theoretical goal is the prediction and control of behavior. Introspection forms no essential part of its methods, nor is the scientific value of its data dependent upon the readiness with which they lend themselves to interpretation in terms of consciousness. The behaviorist, in his efforts to get a unitary scheme of animal response, recognizes no dividing line between man and brute. The behavior of man, with all of its refinement and complexity, forms only a part of the behaviorist's total scheme of investigation. "

“From the behaviorist's point of view, psychology is a purely objective experimental branch of the natural sciences. Its theoretical goal is to predict and control behavior. Introspection is not one of their methods, nor does the scientific value of their data depend on how easily they are interpreted in terms of consciousness. The behaviorist does not recognize any dividing line between humans and animals, insofar as he strives for a unified understanding of animal behavior. Human behavior in all its refinement and complexity is only part of what the behaviorist wants to investigate. "

Watson transferred the principle of classical conditioning (after Ivan Petrovich Pavlov ) from animal psychology to human psychology. Pavlov always ticked a metronome when a dog was being fed. After a while, the dog only reacted to the ticking of the metronome by secreting saliva, which was otherwise always associated with feeding. The instinctive, unconditional reflex (salivation during feeding) becomes a conditioned reflex through the repeated presentation of the ticking of the metronome before the feeding. Analogously to this, Watson then repeatedly presented a white rat (neutral stimulus) to a little boy, always in connection with a frighteningly loud hammer blow (fright as an unconditional reflex) as soon as the boy touched the rat ( Little Albert experiment from 1920). As a result, the conditioned reflex of fright arose only at the sight of the white rat, without hammering.

Watson later gave his views an even more concise form in Behaviorism than in 1913. The following quote is very well known:

“I should like to step further now and say,“ Give me a dozen healthy infants, well-formed, and my own specified world to bring them up in and I'll guarantee to take any one at random and train him to become any type of specialist I might select - doctor, lawyer, artist, merchant-chief and, yes, even beggar-man and thief, regardless of his talents, penchants, tendencies, abilities, vocations, and race of his ancestors ”. I am going beyond my facts and I admit it, but so have the advocates of the contrary and they have been doing it for many thousands of years. Please note that when this experiment is made up I am allowed to specify the way the children are to be brought up and the type of world they have to live in. "

"I would go even further and say," Give me a dozen well-formed, healthy children and my own custom-designed world to raise them in, and I guarantee you that I can pick and train any of them at random can turn him into any kind of specialist - a doctor, a lawyer, a merchant and, yes, even a beggar and thief, whatever his talents, inclinations, tendencies, abilities, aptitudes and the race of his ancestors ”. I admit that I speculate, but so do opposing advocates, and they have done so for many thousands of years. Please note that this experiment assumes that I may determine how exactly the children are raised and in what world they have to live. "

James Todd and Edward Morris noted that this quote is often taken out of context. In particular, the sentence that relativizes Watson's statement is almost always left out (“I am going beyond my facts and I admit it, but so have the advocates of the contrary and they have been doing it for many thousands of years”). The context of the quotation is also often kept secret, namely that Watson was opposing the supporters of eugenics (the oe "advocates of the opposite side"), i.e. the idea that one can improve the genetic makeup of the population through breeding or selection for reproduction and sterilization can and should. In addition, Watson's other statements make it clear that he was not a representative of the tabula rasa position.

Watson laid out his views on infant education in the work "Psychological Care of Infant and Child" published in 1928. Watson demanded that the child should be deprived of maternal love before it is seven years old. Because motherly love allegedly makes the child dependent and prevents it from conquering the world. In his view, excessive caress restricts psychological growth and hinders future chances of success.

No mother should take her child on her lap. The cleanliness education should be completed with eight months. Watson advocated a special construction on which the child was strapped behind closed doors until it had mastered its digestion. It is also bad to get used to familiar people too much. The mothers could definitely be changed. The child should be left alone as much as possible.

These views must be seen against the background of the educational methods customary at the time . Arnold Gesell criticized this in his book Infant and Child in the Culture of Today from 1943. He took the view that the conflict between nature and culture had been unnecessarily exacerbated by the overzealousness of parents and counselors. Benjamin Spock followed in 1946 with his work Common Sense Book of Baby and Child Care . In it he explicitly opposed the Watson school and called for a general relaxation of discipline.