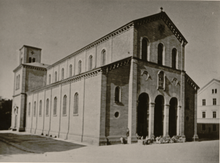 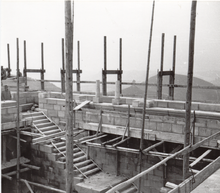 Trifels near Annweiler, construction of the palace building (probably around 1942)

The Joseph Hoffmann & Söhne AG was the oldest construction company in Ludwigshafen with branch offices in Mannheim , Freiburg and Halle (Saale) .

Founded by the master builder and mayor Joseph Hoffmann (1810–1881), who went into business on May 15, 1843 with a foreman and 20 workers, the company advanced to become one thanks to extensive commissions for public and private buildings in the years between the two world wars the largest employers in the region. In 1870, after taking in her sons, Franz Hoffmann senior. (1844–1920) and Wendelin Hoffmann (1845–1891) converted into an open trading company (oHG) (entry in the commercial register on August 29, 1870). In 1878 the third son, Joseph Hoffmann jun. (1850–1913) became a partner. In 1913 the company was converted into a limited liability company and in 1922 - with the participation of Rheinische Creditbank and the Röchling Brothers in Mannheim - into a stock corporation . In 1958 the company was dissolved. The operations and properties in Ludwigshafen were taken over by the competitor Wolff & Müller .

A large part of the construction work carried out in the up-and-coming industrial and commercial city of Ludwigshafen during this time was carried out by Joseph Hoffmann & Sons, including:

The first Ludwigshafen train station was built for the Palatinate Railways in 1847, the representative headquarters building in 1853, and the so-called cash desk in 1868.

In 1881, the company built a company building with restorations, a bathing establishment and ballrooms on its own account, which was converted into a company-owned stock corporation in 1889 and sold to the city of Ludwigshafen in 1920. After it was destroyed in the war, today's Mayor Reichert House was built in its place.

In 1846, Joseph Hoffmann was commissioned to build the Royal Villa Ludwigshöhe near Edenkoben . In 1873 the company expanded to the other side of the Rhine and opened a branch in Mannheim . The buildings erected there include the management building of the Rheinische Creditbank (1873), the water tower (1887), the Rheinmühlenwerke (1898), the stock exchange (1899–1902), the festival hall Rosengarten (1899–1903), the Theresienkrankenhaus , the Capitol- Movie theater (1927), the old planetarium (1927) and the switchgear of the large power station .

After the First World War, further branches were opened in Freiburg im Breisgau and, in connection with the construction of the Leunawerke , in Merseburg. Between 1916 and 1926, the company built large parts of the facilities in Leuna, as well as other public and private buildings, including the two churches (Evangelical Peace Church and Catholic Christ the King Church) and the hospital in Leuna.

During the time of National Socialism , the company was involved in numerous infrastructure and military buildings, including the construction of the motorways in the Mannheim-Heidelberg region and the West Wall as well as several bunkers in Ludwigshafen (Rollesstrasse, Pettenkoferstrasse) and Mannheim. At the end of the 1930s, work began on safeguarding and rebuilding Trifels Castle near Annweiler , which was to be rebuilt as a "national consecration site".

In the years between the end of the World War and the liquidation of the company, she was particularly involved in the reconstruction of the city of Ludwigshafen. In the 1950s, this included the restoration of the destroyed Church of St. Ludwig and the Church of Peace and the new building of St. Sebastian in Mundenheim . One of the last major orders was the construction of the Willersinn House on the site of the company's former headquarters in Bismarckstrasse (today: Bismarck Center).

The foundation established by the company for the benefit of schoolchildren and trainees is now administered by the "Ludwigshafen Citizens Foundation".