Cross in the town center

Mundenheim is one of the ten districts of the city of Ludwigshafen am Rhein in Rhineland-Palatinate .

It is a traditional, mainly Catholic place with a history of more than a thousand years.

Mundo on the district fountain in the Peace Park

In the area of ​​Mundenheim there was a Roman military or street police station, but without a time. A Roman well was also found on the grounds of the school center.

The Romans were followed by the Alemanni and then by the Franks around 500 AD. It was a Frankish clan chief named Mundo , who settled with a group of subordinates in the home of the Mundos (Mundinheim) .

According to legend, the Franconian Mundo came up the Rhine in search of land, where his companion Hita had already hurried ahead of him. As he climbed the high bank, he saw a meadow with cowslips . Hita showed him the place. Mundo was thrilled and said to Hita:

“Let's build a farm here, and it will be called Mundinheim; a key should adorn our coat of arms. "

The key can still be found today in the local coat of arms, but there it is associated with St. Peter.

The first documentary mention of Mundenheim can be found in a document dated June 27, 770 in the Lorsch Codex , according to which a certain Imbrecht gave the Lorsch monastery a ride at court .

In the city chronicle of Ludwigshafen published in 1903 it says:

“Today's city of Ludwigshafen am Rhein emerged from the former communities of Friesenheim and Mundenheim, which were already mentioned in a document in ancient times. As far as can be proven, the place Friesenheim appears for the first time in documents of the Lorsch Monastery, founded by a Count Cancor in 763, according to which in the 2nd year of Charlemagne (770) - note: the third year is correct, 771 - the consecrated Hita hers donated all properties in Friesenheim, Weißenheim, Ebertsheim, Mundenheim, Hemsheim and Karlebach to this monastery. "

Mentioned in the Lorsch Codex 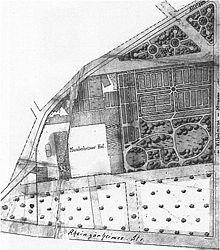 Mundenheim was mentioned as early as 770 in the “Codex Laureshamensis” (Lorsch Codex) , written in the southern Hessian monastery of Lorsch, at about the same time as the other modern Ludwigshafen districts of Hemshof and Maudach . The church of St. Sebastian and Peter was first mentioned in 1231. In 1482 the Weißenburg monastery sold all its rights to the St. Andreas monastery in Worms . The Hirschhorn house ( Hirschhorn am Neckar ) was acquired. Philipp Christoph von Sötern ( Elector Archbishop of Trier and Bishop of Speyer ) was drafted into Mundenheim in 1632. The place came back to the diocese of Speyer in 1653. During the Palatine War of Succession from 1688 to 1697, the entire village was destroyed.

There was an upswing in Mundenheim in 1720, when the capital and residence of the Electoral Palatinate moved from Heidelberg to Mannheim. The nobility settles. Large estates were established.

The large estate was acquired in 1770 by Prime Minister Peter Emanuel Freiherr von Zedtwitz-Liebenstein . In 1771 von Zedtwitz bought the rest of the village, which was under Speyer suzerainty, from the Dalbergs. Today the Hofgut building and the Zedtwitz Park (formerly Langemarck Park) at the former Mundenheim post office still remind of this. When the minister died, the estate went to his widow, née from Herding over. Mundenheim was destroyed again by the French revolutionary army . Mundenheim was in French possession in 1798. After the war of liberation , Mundenheim was under the Austrian-Bavarian administration. From 1816 to 1945 Mundenheim was Bavarian . In 1853 Mundenheim had to cede parts of its district to Ludwigshafen, which was founded in 1843. On December 1, 1899, after previous heated negotiations by Mayor Deuschel, Mundenheim was incorporated into Ludwigshafen.

In 1891, Dr. Fritz Raschig established a chemical plant on the outskirts of Mundenheim, today's Raschig GmbH .

Raschig came to BASF after studying chemistry in Berlin and Heidelberg . He received his first patent for his work on the behavior of nitrous oxide to sulphurous acid . He rose to the position of works manager, but then left BASF and founded his own chemical factory, which was successful in extracting pure tar components such as anthracene , naphthalene , carbolic acid , toluene and benzene . The invention of the Raschig ring represented a breakthrough in process engineering.

Quote from the city chronicle

“The place was counted among the so-called Ausdörfer in the Electorate of the Palatinate until 1709 and in a dispute about the ' wild catch ' right to be mentioned later , the Bishop of Speyer even tried to cast doubt on the Palatinate ownership right until finally the Bishop of Speyer ceded 'all legal persons brought and addressed in this place' to the Electoral Palatinate, with which the pending dispute over ownership was settled in favor of the Electoral Palatinate.
The Rhine had created islands or floodplains near Mundenheim through various eruptions and even threatened the village itself with ruin, until a main dam was built above the village in 1759 and the current was thereby led back into its old bed. "

In 1936 the Langemarck monument was inaugurated at the Hofgut on the initiative of the war club . The inscription, a quote from the Edda , reads:

“Property dies,
clans die,
you die like them.
I know one thing:
that the fame of the dead lives forever. "

In 1914 many young soldiers died near Langemarck in Flanders , who had been sent to the front without any lengthy preparation.

In 2006, a monument to Baron Peter Emanuel von Zedtwitz was inaugurated in the immediate vicinity of the Hofgut, donated by the descendants of the former owners of the Hofgut, the Böhmer family, and designed by the sculptor Gernot Rumpf and his wife Barbara.

In the middle of the monument there is a three meter high column with keys. The monument has the following elements:

In the Mundenheim school center are:

The statistics of the city of Ludwigshafen as of December 31, 2013 in Mundenheim counted 32% Catholic Christians and 21% Protestant Christians of the population of Mundenheim. Other religious communities and non-denominational groups made up 47%.

There are two parishes in Mundenheim.

The Catholic parish church of St. Sebastian (and St. Peter) is a replacement building after the previous structure burned out in 1943 due to the effects of the war and the church ruins had to be blown up in 1951 to clear the building site.

The new building was the first church building in brick-built reinforced concrete frame construction in southern Germany. The large windows with lead glazing were made to designs by Munich professor Albert Burkart . The inauguration of the newly built church took place on August 29, 1954. 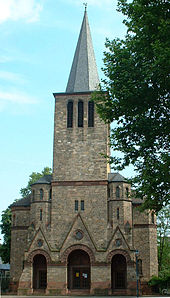 The Protestant Christ Church was built between 1901 and 1903 according to plans by Franz Schöberl . During the Second World War the church burned down completely in 1943 and was rebuilt between 1952 and 1954.

Mundenheim had several corridor chapels, one of which has been preserved on the old pilgrimage route to Oggersheim (Wollstrasse) opposite the Große Blies and the cemetery.

The large 3.50 m high cross from 1757 probably reminded of the floods of those years when the Rhine almost destroyed Mundenheim. The inscription on the front read:

“Just as Moses exalted the serpent in the desert, so the Son of Man must be exalted so that all who believe in him do not perish, but have eternal life. Johann: 3rd Cap., 5th and 14th verse, as well as Book of Moses, 21st Cap., 9th verse "

The Small Cross was destroyed together with the Catholic Church in 1943. The inscription on the base read:

"Father in your hands I commend my spirit, Lucas, XXIII Cap., Verse 46"

The Small Cross was donated in 1893 by the teacher and mayor Franz Butscher. The inscription reads:

The political body for the local district is the Mundenheim local council and the mayor . The local advisory council has eleven members. He can be heard on all important questions relating to the local district.

The footballers of the MSV Ludwigshafen are nicknamed "Schubännel" (high German: shoelace ). This goes back to an incident in the 1930s when a player's shoelace tore while playing in the Gauliga. He called to the supervisors that he needed a new "shoe bench" . The supervisors replied that they didn't have one. The player was more concerned with his shoes than with the game and shouted: "If you don't get a Schubännel now, I can no longer play."

The team rose in 2007 to the district class. In the 2010/2011 season, the 2nd team of MSV won the 1st district class Rheinpfalz Süd. The season ended with the same number of points as the team of BSC Oppau II. However, in the end the better scoring resulted in MSV being first.

The VTV Mundenheim 1883 are mainly active in the areas of handball and volleyball.