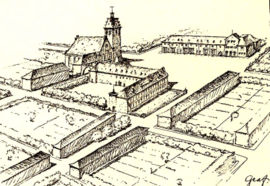 Garden city on the district fountain

Evangelical Church of the Redeemer in the garden city

The garden city is one of the ten districts of the city of Ludwigshafen am Rhein . It was initiated by 16 citizens who founded the building cooperative Gartenstadt Ludwigshafen eGmbH on December 1, 1909 . This cooperative was a member of the German Garden City Society , the aim of which was to create a new type of city outside of the tenements .

The members of the cooperative - factory workers and artisans - wanted to take care of the housing issue themselves , since like most cities in the empire Ludwigshafen, a municipality since April 15, 1853 and elevated to a city on November 8, 1859, showed little inclination to devote themselves to this task . Until 1906 there was not even a housing policy. A housing office was not set up until 1913.

What is a garden city?

In the Palatinate Post of September 14, 1909, Carl Eicher described his plan to start a "movement in the field of housing reform". In it he quoted from the statutes of the German Garden City Society:

“A garden city is a systematically designed settlement on inexpensive land that is permanently owned by the community in such a way that any speculation with the land is impossible. It is a new type of city ... "

In the General-Anzeiger, Carl Eicher specified his ideas and described the efforts in other cities and referred to heritable building rights and share certificates. His request was:

"The garden city should not be a private company, it will be realized by bringing together as many ideally talented people as possible."

The founding meeting took place on October 1st, 1909 in the "Saalbau Haßler". The General-Anzeiger read about it:

“The purpose of the garden city cooperative is to acquire larger plots of land in the vicinity of the city, to develop them and to build healthy, beautiful and cheap single-family houses in gardens for the members. Furthermore, the cooperative should serve to bring about a cheaper, better and better taste in housing. "

Each member had to purchase a share of the business worth 200 marks , which could be paid for either by a one-off payment or in installments of at least 3 marks per month. As soon as the share was paid in full, the member was entitled to have a house built.

For comparison: around 1900 a worker had an annual income of around 800 marks. This shows how important the building cooperative was back then. A worker could never have achieved the goal of having his own house with a garden with his own means. Nevertheless, the popularity was initially not so great. The majority of workers were skeptical of the matter, especially since the union cartel and social democrats adopted a wait-and-see attitude.

The Pfälzische Post reported under the title "The garden city cooperative - a cooperative for the middle class" on a meeting of the Social Democrats in Friesenheim , at which the managing director of the consumer association , Valentin Liebmann , gave a lecture on the causes and consequences of the housing shortage. The reason for the offense was § 2 of the statutes, in which the sale of the houses is mentioned. "Selling houses to new owners again does not counteract the housing shortage, but only provides temporary relief," says Valentin Liebmann. Liebmann, however, joined the building cooperative himself in the spring of 1910 and was immediately elected to the supervisory board at the end of the year. At the first general assembly on April 2, 1910, the cooperative had 81 members. The management board and the supervisory board were reorganized. 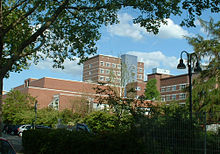 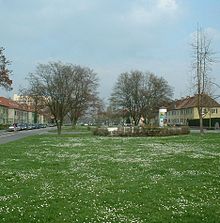 Immediately after the entry in the cooperative register, the building cooperative turned to the mayor's office with requests for the acquisition of land, but also for intercession with the royal Bavarian district office, where a subsidy for the establishment costs had been applied for. On May 4, 1911, it was noted in the log book that an interview with Mayor Friedrich Krafft would lead to a favorable settlement of the request.

In the meantime they had stopped buying building land and instead dealt with questions of heritable building rights. In Mannheim, the local garden city cooperative informed about their experiences.

In the autumn of 1911, the main, building and finance committee of the municipal council commissioned the building authority to “draft a generous plan that encompasses the area from Maudacher Strasse in the direction of Oggersheim” . In 1912 City Secretary Paul Dissinger , City Builder Markus Sternlieb and Lord Mayor Friedrich Krafft joined the cooperative. Without these three people, the further development would have been hardly conceivable.

In the meantime, the members of the Mannheim Garden Suburbs Cooperative had started construction with early support from wealthy citizens and the city of Mannheim. A visit from Ludwigshafen to their Mannheim colleagues is noted in the annual report as a “milestone in the history of our cooperative”.

On April 24, 1913, the Ludwigshafen town council experienced a tough argument that was determined by conflicting interests. Under the chairmanship of Mayor Friedrich Krafft, the council decided to lease 26,440 m² of urban land on the Mundenheimer Hochfeld to the building cooperative and to approve a loan of up to 80 percent of the loan amount. At this meeting, the council made housing a key task of the city administration.

The cooperative leased the site for 62 years. The cooperative of the city of Ludwigshafen had to pay four percent annual interest on the costs of the development.

The land issue was resolved in December 2004 so that the building cooperative acquired the land from the city. This happened against the background that the interest would have been too high if the long lease had been extended. This would have had a direct impact on rents.

At the well-attended general meeting on May 7, 1913, it was decided, under the direction of Paul Dissinger , to hold an architectural competition in order to receive designs for the development. In October 1913, the jury presented 26 designs. The jurors awarded the first prize to the design by Ludwigshafen architects Karl Schuler and Karl Latteyer with the motto "Sunny Au". The second prize also went to the same architects for a second design with the motto “From experience”. Third prize went to a design by the architect Otto Schittenhelm, who is also based in Ludwigshafen. The results were shown to members and other interested parties as part of an exhibition in the Pfälzer Hof .

A survey of the members in December showed that 20 two-bedroom and six three-bedroom houses are to be built. The architects Schuler and Lattayer received the contract for planning and construction. The house types of the first-placed design and the building line plan of the second-placed are implemented.

The first groundbreaking took place on April 14, 1914 (Easter Tuesday) on Wachenheimer Strasse. The topping-out ceremony took place in the summer and the first occupancy took place at the end of the year, shortly before the outbreak of the First World War , which then prevented further construction work.

Since the single-family houses of the building cooperative formed a small settlement, the foundation stone for the Gartenstadt district was laid. The houses were mainly occupied by workers and their families. The rent was between 26 and 46 marks per month, depending on the size (2–4 rooms with kitchen-living room). The use of the house garden was included in the rent.

Compared to the north and south districts, the conditions were heavenly, without industrial emissions, without the narrow and dark backyards that are common in mass housing construction. The children lived in this environment, but the way to school was long. The children had to run at least twice a day as far as Mundenheim. It was not until 1917 that a stop for the Ludwigshafen – Meckenheim local railway was set up, and in 1929 the first bus line was set up.

By keeping pigs, goats, rabbits and poultry as well as growing fruit and vegetables in the house gardens, the menu was improved in the war and post-war period. The young settlement did not yet have its own shops. Bakers, butchers, a doctor, but also a number of authorities were in Mundenheim.

After the outbreak of the First World War, there was no longer any possibility of continuing construction. Even the first phase of construction could only be completed with difficulty. Financing was also not going well. Instead of the planned equity of 20 percent, only 11.5 percent of the construction costs could be raised, while the rest had to be financed through loans from the Stadtsparkasse. A total of 175,000 marks were spent on the first construction phase, i.e. less than 5,000 marks per house.

On February 1, 1918, the General-Anzeiger noted : "... that the accommodation of families with children in a single room, as well as the use of uninhabitable rooms in the attic or rear building is no longer a rarity" . This is how much the housing shortage that has been attached to Ludwigshafen since its foundation had worsened during the war years. The General-Anzeiger counted Ludwigshafen among those cities that were most affected by the housing shortage. The number of vacant apartments fell from three to one percent, and over 2000 people were looking for an apartment.

The city administration then set up a committee to promote housing construction, in which the Gartenstadt building cooperative was involved with two members.

In 1919, thanks to a donation from the Ludwigshafen entrepreneur Fritz Raschig on the Hochfeld, the construction of a warrior shelter settlement for World War II veterans began. As early as 1916, Raschig had informed Mayor Friedrich Krafft that he wanted to donate 200,000 m² of land to the city. The city should add 100,000 m² from its property and buy another 150,000 m² in order to promote the construction of warrior homes.

On the site that the city added to the foundation, the garden city cooperative settlement from 1914 was already located. The other buildings were also built on this site by 1935. The BASF participated in the project with 500,000 marks.

The city council granted the same conditions for the heritable building contract and the financing as in 1913. The Bavarian state government added grants for so-called “lost additional expenses”, which was the difference between the actual costs and the pre-war prices (peace costs), which in this case more than 1.5 million marks.

The chairman of the supervisory board, Paul Kleefoot , wanted to build a cooperative building at the same time as the second construction phase. However, the consumer association opted for the smaller solution and only released funds for the construction of a shop. The construction of 81 houses began with the groundbreaking on July 1, 1919. Of the 81 houses, 16 were built on Maudacher Strasse, 17 on Wachenheimer Strasse, 11 on Deidesheimer Strasse and 22 on what was then Hambacher Platz.

From the outside, these houses differ significantly from those of the first construction phase, but this does not apply to the floor plan. Each of the new houses now had a stable, but not yet a bathroom, the function of which was taken over by the laundry room. Since electricity was also available from 1920, the new houses were provided with an electricity connection in addition to water and gas.

It was not possible to complete the buildings by the end of 1919 - among other things because cement and wood deliveries did not arrive on time. Ultimately, the construction management had to limit itself to providing the buildings with a roof before the onset of winter.

The Ludwigshafen garden city lies between the districts of Mundenheim and Maudach . It is divided into three parts:

The mayor of the Garden City is Andreas Rennig (SPD). In the runoff election on June 16, 2019, he prevailed against the previous incumbent Klaus Schneider (CDU) with a 57.11% share of the vote. This election became necessary after none of the original five applicants had achieved the necessary majority in the local elections on May 26, 2019 .