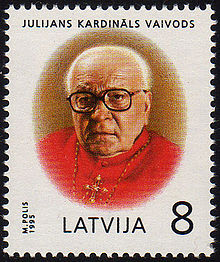 Julijan's Cardinal Vaivods (born August 18, 1895 in Vārkava near Preiļi , Vitebsk Governorate , today Latvia ; † May 24, 1990 in Riga ) was the Apostolic Administrator of Riga .

Julijans Vaivods received his philosophical and theological training in Saint Petersburg and Riga. On April 7, 1918, he received the sacrament of ordination by the auxiliary bishop in Mogilew ( Belarus ) Jan Feliks Cieplak and then worked as a pastor in Liepāja as well as diocesan chancellor and diocesan judge. From 1944 to 1958 and from 1962 to 1964 he headed the administration of the Archdiocese of Riga as vicar general . From 1958 to 1960 he had to do forced labor as a political prisoner . In 1962 he became Vicar General of the Archdiocese of Riga .

In 1964 Julijans Vaivods was able to participate in the Second Vatican Council at the special papal invitation . In the same year Pope Paul VI appointed him . the titular bishop of Macriana Maior and ordered him Apostolic Administrator in the Archdiocese of Riga and Bishopric Liepaja . He received his episcopal ordination on November 18, 1964, Curia Cardinal Paolo Marella in Rome . Co- consecrators were the auxiliary bishop in Riga, Jazeps Rancans , and the apostolic administrator of Minsk , Boļeslavs Sloskāns .

Pope John Paul II accepted him on February 2, 1983 as a cardinal priest with the titular church Santi Quattro Coronati in the college of cardinals . He was the first cardinal from Latvia. In the 1980s, Cardinal Vaivods attended several synods in the Vatican. He died on 24 May 1990 in Riga and has been in the Cathedral of Aglona buried. At the time of his death he was the oldest cardinal in the world.