Kitchen knives are knives that are used to process food. In general, they consist of a shaft , in the one of steel or ceramic -made blade is inserted. The shapes and sizes of kitchen knives vary depending on the purpose. The quality differences are great and range from inexpensive stamped blades to hand-forged ones . Butchers use less elaborately made knives than cooks . The most important kitchen knife manufacturers come from Germany, Japan and France. Cheaper qualities come from Spain and Portugal and especially from China.

The following classification of the knives is based on their purpose.

The utility knife , alternatively known as a paring knife , serves as a little helper and has a narrow blade. The steel blade of the all-purpose knife is usually between 9 and 15 cm long, the paring knife is usually a maximum of 8 to 9 cm. In both cases it is pointed. The all-purpose knife is suitable for cleaning, cutting and peeling vegetables , fruit or even smaller pieces of meat , the smaller all-purpose knife (paring knife) is often preferred for chopping onions, garlic and herbs or peeling tomatoes. In addition, the handy paring knife is often used in a variety of ways for serving, garnishing and decorating food, drinks and desserts. All-purpose and paring knives, often in different designs and qualities, are hardly missing in any household and therefore have many other names depending on the region and dialect: cutting devil, carver, knippchen, kitchen pitter, pitter knife, pitterchen, Hümmelchen or Hümmeken, Zöppken , Kneipchen or Kneibchen The latter both derive from the Middle High German Kneip for knife. The English word for knife "knife" is etymologically related to Kneip .

A boning knife is a knife that is used for removing bones and skinning meat or poultry . With the narrow and slightly curved blade, it can be easily guided along the bone. There are boning knives with rigid or flexible blades. The boning knife was already used in the Middle Ages, when the knife with the so-called L-blade, which was no longer than 15 cm, was used for skinning game. Every hunter always had such a knife with him. From there it went to the butcher's shop and thus to the chefs.

A bread knife has a long blade with a coarsely serrated edge. This serrated edge was improved in the 1930s by Franz Güde in Solingen . The length of the blade makes it possible to cut wide loaves of bread . The coarse grooves prevent the disc from flaking . There are different forms; In recent years bread knives have often been manufactured in a lighter form with a shorter blade in response to changes in the bread supply. Today, much smaller loaves of bread and rather light, fluffy types of bread (toast, white bread) and wholemeal breads are predominant. These do not require knives as strong and long as they used to be.

A colored knife (also: colored cutting knife or Demidoff knife ) does not have a straight, but a wavy or zigzag profiled edge. Combination versions that are equipped with a straight edge and a serrated edge on the back of the knife are also used in the household. It is used to decoratively cut raw or cooked vegetables (e.g. beetroot ) and fruit.

A fruit or fruit knife is a small knife with a straight, narrow blade, in order to be able to make straight cuts in the fruit as well as curved cuts e.g. B. to remove the core from a quartered apple.

The paring knife is shorter than the tomato knife (up to 9 cm) and has a straight blade with a curved back.

Hōchō is a collective name for various forms of Japanese kitchen knives such as Santoku , Nakiri or Deba .

A cheese knife is a medium-length knife with recesses (holes) and / or a fork tip on the blade. This makes it easier to cut cheese, especially soft cheeses . These, such as As Brie , Camembert or Romadur have matured a sticky-soft consistency. In order to prevent the knife from sticking with cheese residues, the blade is not solid and has the recesses just mentioned. The fork tip makes it easier to pick up the cut piece of cheese. 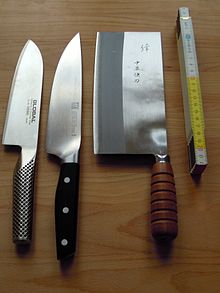 From left to right: Japanese, German and Chinese chef's knives

A chef's knife is a heavy all-purpose knife with a large blade that is 15 to 26 cm long and sharpened on both sides. It is the kitchen's universal knife and is used for dividing, slicing, weighing and chopping for meat as well as vegetables, salads and spices; it has a wider blade than the utility knife.

Among the Japanese knife types, the santoku , which means knife of the three virtues and emphasizes that meat, fish and vegetables can be cut with this knife, has become more widespread in recent years . In contrast to the European one, it has a wider, but shorter blade, sloping at the tip towards the cutting edge, and is ground flatter, which gives it greater sharpness. Santoku are available in lengths of 14 to 18 cm; the width can be up to 6 cm. Santoku are also produced in Germany and are often incorrectly called "Japanese knives".

The Chinese chef's knife has the shape of a hoe , but is not suitable for breaking bones and cartilage, but is used for cutting and chopping herbs and vegetables. The blade - also sharpened on both sides - is usually 20 cm long and can be up to 10 cm wide. The advantage of the blade is that you can easily pick up clippings from the board with it.
There are now numerous mixed forms between the types.

The parmesan knife is not used for cutting, but for splitting and breaking pieces of cheese out of a large, very hard piece of parmesan . It has a very short but massive handle and a blunt blade.

A paring knife is a very small knife , usually 8 cm long, with a curved blade, in order to be able to comfortably peel especially round fruit and vegetables. The paring knife or paring knife has a blade in the shape of a beak, which adapts to any direction when paring fruit, vegetables or potatoes, making work easier.

The ham or salmon knife is particularly suitable because of its narrow shape and the long, pointed steel blade for cutting large, well-smoked or air-dried pieces of ham, but also for filleting fish and cutting wafer-thin slices of meat, such as roast beef.

In contrast to the all-purpose knife, a tomato knife has saw teeth on the cutting edge and is therefore particularly suitable for cutting tomatoes and other vegetables. Due to the slightly pointed shape of the steel blade between 12 and 15 cm long, the knife penetrates the cut material at a slight angle and thus prevents it from being crushed. The blade width corresponds to that of the all-purpose knife.

The carving knife , also called meat knife , is a 15 to 30 cm long, narrow, very pointed knife with an indentation on the back of the blade, which is primarily used for cutting ( carving ) meat. The blade is approx. 2.5 to 3 cm wide.

The chopping knife is used for chopping herbs and the like. Ä. It has two handles and a round, sharp blade. Some designs have two or three parallel blades. The name comes from the use of the knife: you weigh the knife back and forth.

Other types of knives

Colored cutting knife for decorative cutting of fruit or vegetables

A multitude of terms, mostly in diminutive form, were collected and published by readers of the time . (Hümmelchen, Kneipchen, Schneidteufala etc.)