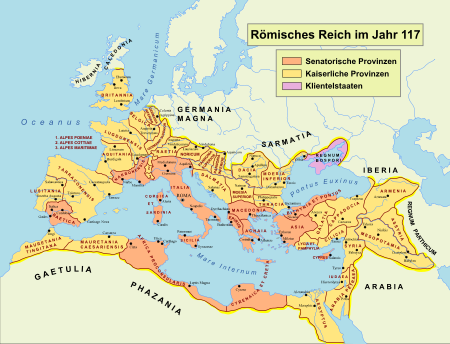 An imperial province is a Roman province in which the emperor was nominally the governor. As his deputy in the province and de facto governor, he appointed a Legatus Augusti pro praetore (for example: "Representative of the emperor with the rank of praetor "), whom he selected from among the senators of higher rank (former praetors or consuls ). The term of office was usually several years (usually two to four).

The imperial provinces were often the strategically important border provinces. One or more legions were stationed in them, the commander of which was the Legatus Augusti (several legions had their own Legati legionis).

Shortly after the consolidation of Augustus' rule , the Roman provinces were divided into imperial and "public" provinces (provinciae publicae) ; the latter are inexactly referred to in research as "senatorial" provinces, because in them the senate determined the governor by lot.

In the year 14 the following provinces were imperial:

In the period that followed, the following were established as imperial provinces: