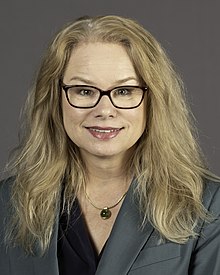 Kirsten Kappert-Gonther (born November 3, 1966 in Marburg ) is a German doctor and politician ( Bündnis 90 / Die Grünen ). She has been a member of the German Bundestag since 2017 . From 2011 to 2017 she was a member of the Bremen citizenship and from 2015 to 2017 also deputy parliamentary group leader of the Greens.

In 2019 she ran unsuccessfully for the office of chairman of the Green parliamentary group together with Cem Özdemir .

Kappert-Gonther went to school in Marburg for the first few years. Her family then moved to the Ruhr area, where she graduated from high school in Bochum in 1985. She then studied human medicine at the University of Marburg and in Brisbane / Australia . She did her doctorate on the psychosocial consequences of the Stolzenbach mine disaster . After further training as a specialist in psychiatry and psychotherapy with Klaus Dörner in Gütersloh , she became the medical director of a rehabilitation facility for the mentally ill. From 2002 to 2005 she set up and managed a psychiatric outpatient clinic in Bremen. From 2005 until she moved into the Bundestag in 2017, she ran her own practice for psychotherapy.

Kappert-Gonther is married, has two grown children and lives in Bremen.

At the election meeting of the Bremen Greens in November 2016, Kirsten Kappert-Gonther was elected the top candidate of her state association for the 2017 federal election. She also ran as a direct candidate in constituency 54 (Bremen I).

In the fall of 2019 said Kappert Gonther, at the election of the Group Executive Board of the Greens together with Cem Özdemir for the post of chairman of the Greens parliamentary group to run and therefore the former Chairman Katrin Goering-Eckardt and Anton Hofreiter to want to replace. Özdemir and Kappert-Gonther justified their candidacy for fighting that they are convinced that fair competition for the parliamentary group, both internally and externally, is good and necessary to position the Greens as a parliamentary group with renewed vigor as a credible antithesis to the government until the next federal election . According to their own statements, however, the duo did not aim for a top candidate for the next election campaign in the federal government. In the election on September 24, 2019, Kappert-Gonther was defeated by the previous parliamentary group leader Göring-Eckardt, who was confirmed in office with 61.2 percent of the votes by the Green MPs. Her colleague Özdemir was also unable to prevail against the incumbent Hofreiter, who was also confirmed in office with 58.21 percent.

In the 19th German Bundestag , Kappert-Gonther is the chairwoman of the Health Committee . She is also a deputy member of the Culture and Media Committee .