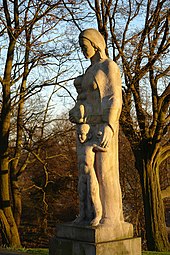 War widow (also war widow ) is a name given to a widow whose husband in the war fallen is. After the Second World War, there were around one million war widows in Germany who were surviving dependents from both world wars, who were considered needy but also had to look after their children. Because they would have lost their pension if they were remarried, war widows were more likely to live with a man unmarried (so-called uncle marriage). 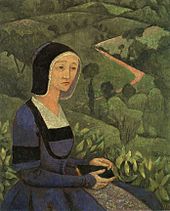 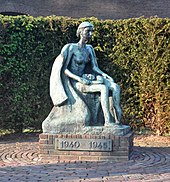 The sculpture Widow with Child (weduwe met kind) , created by Lidi van Mourik Broekman in Weesp in 1956 , commemorates the war widows of the Second World War in the Netherlands.

After the First World War , the military survivors' law of May 17, 1907, served as the basis for caring for war widows in Germany , but initially did not take into account step-children and illegitimate half-orphans . For women who were married during the war, if their husbands fell within three months, there was no so-called widow's benefit , i.e. no benefits for the now single mother. The law also stipulated that the provisions for officer's widows were calculated according to the rules for pensions , while widows of crew ranks received a lump sum of 540 marks a year , 600 marks for non-commissioned officers and 900 marks for sergeants , later always depending on the number of children . In addition, there was a so-called war supply for the women . The commentary literature speaks of a “perfidious injustice” of the complicated regulations, because the survivors' pension was only calculated based on the rank of those killed in the war and not on their marital status.

The Wehrmacht Welfare and Supply Act of August 26, 1938 regulated the supply of Wehrmacht soldiers . In terms of content, it adhered to the traditional traditions. However, the supply of NCOs was adjusted to that of the officers. With the unconditional surrender in 1945, the German armed forces ceased to exist. This also meant that all public service relationships of active professional soldiers were extinguished. The Basic Law addressed this problem in Art. 131. The law regulating the legal relationships of persons falling under Article 131 of the Basic Law of May 11, 1951 granted those affected a special kind of pension.

After World War II , in which around 5.3 million German soldiers died, war widows in West Germany (including survivors of World War I) included around one million women. On the one hand, they were viewed by the authorities as needy who had to provide information about private matters. On the other hand, they also had to look after their children.

At the beginning of the 1950s, the centralized war victims' care at a higher administrative level took care of the war widows. The Federal Ministry for Family Affairs propagated at this time the so-called normal family in which the widows were not to integrate, as they should, according to the practice then-wife image "abstinence" and restraint, and in terms of working life.

Another problem from the point of view of the offices was the so-called uncle marriages , in which a man lived in illegitimate partnership with a widow in order not to jeopardize their state provision. If the war widow enters into a new marriage, she has no pension entitlement at the end of the month in which she marries. Instead, she receives a severance payment equal to fifty times the basic pension due for that month. If the new marriage is declared null and void or dissolved, the pension entitlement is revived ( Section 44 BVG ).