The district is located in the southwest of the Mexican capital and is almost completely enclosed by the Delegaciones Álvaro Obregón (in the north and west) and Tlalpan (in the east and south). It has one of the highest proportions of green space in Mexico City and the Río Magdalena , the only river in the Mexican capital, flows through the district. In addition to the actual La Magdalena Contreras, the Delegación includes twelve other towns, the largest of which is El Gavillero with 305 inhabitants.

In the 17th century, Franciscan and Dominican missionaries settled in the region to evangelize the indigenous people . For this purpose, they built a chapel in honor of Saint Mary Magdalene , which was later included in the place name. The second part of the name recalls the former landowner Tomás de Contreras. 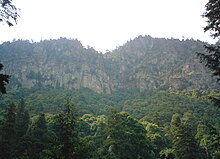 Due to its large proportion of green areas, the district was able to specialize in ecotourism with the Los Dinamos and San Bernabé Ocotepec forest parks .