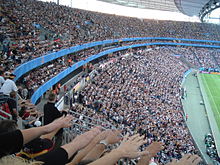 La Ola at an international handball match in the Lanxess Arena

La Ola (from the Spanish "ola", the "wave"), in German also La Ola wave , spectator wave or stadium wave , is a mass performance in stadiums carried out by the audience . The spectators imitate a wave of water moving in a circle through the stadium by briefly raising their arms in a given direction. The visual effect is occasionally reinforced by standing up and sitting down briefly. Acoustically, the wave is often accompanied by a loud hoot. This also makes it easier for the viewer to notice the approaching "wave peak" and thus his commitment to the described sequence of movements.

The American cheerleader Krazy George Henderson claims to have invented the audience wave and explained it to the audience present on October 15, 1981 during the American League Championship Series at the Oakland-Alameda County Coliseum .

Other sources claim that the Audience Wave was invented by cheerleader Robb Weller and performed on October 31, 1981 at the University of Washington's Husky Stadium during a Washington Huskies football game against the Stanford team - first in a vertical version, from below running upwards. This version was unsuccessful, so Robb Weller tried a horizontal version that was accepted by the audience. The long-time conductor of the university band, Bill Bissell, claims to be involved in the invention of the wave . In addition, the 1962 film Son of Flubber is cited as an indication of an older tradition, because in it at 1:12:13 to 1:12:20 the audience suggests such a wave movement.

La Ola was shown to an international audience for the first time on August 8, 1984 at the Summer Olympics in the USA. About 80,000 people hosted the wave at the football match between Brazil and Italy at Stanford Stadium .

The Mexicans also claim the origin of La Ola for themselves and relocate their origins to the Estadio Universitario in 1984. The stadium wave became known around the world thanks to the 1986 World Cup in Mexico, two years later . In the English-speaking world outside of North America, it is called the Mexican wave .

From 1987, La Ola was also introduced in ice hockey. At the Bundesliga club ESV Kaufbeuren , the stadium announcer initiated the “wave” for the first time in the game against the Cologne EC . The "wave" rolled over ten times through the sold-out stadium on Berliner Platz.

La Ola is controversial among football fans. Many consider it the epitome of enthusiasm because it involves the entire stadium. Others criticize it as a sign of the event character of soccer games, since the spectators only celebrate themselves, the wave distracts the spectators from the actual game and the cheering effect for the players is low. This is mainly justified by the fact that the audience would start the wave especially if only few interesting scenes could be seen in the game itself. Again and again there are expressions of displeasure (whistling) of the participants when the wave runs out in the area of ​​the VIP box or the opposing supporters. In recent times, La Ola has mostly only been used when the home team delivers an extremely convincing performance and therefore leads as high as possible or is about to achieve an important victory.

Nowadays, the wave is usually started by the spectators in a block of the stadium counting down aloud from ten to one. Then they all raise their hands at the same time and thus create the wave crest, which is then continued to the side and starts moving. The direction varies from stadium to stadium. Usually several such attempts are necessary before the wave circles the entire stadium.

In the film Harry and Sally (1989) there is a scene during a football game in which Harry and Jess sit in the stands and have to get up again and again during the dialogue because the audience is watching the wave.

A mathematical model of La Ola was presented in 2002 by Dirk Helbing and two Hungarian researchers.

The frequently used formulation of a La Ola wave is, from an etymological point of view, a pleonasm . The Spanish term “La Ola” literally means “The Wave”. Both the indefinite article “a” and the addition “wave” double aspects that “La Ola” already expresses.