The following important information is missing from this article or section:
history
Help Wikipedia by researching and pasting it . 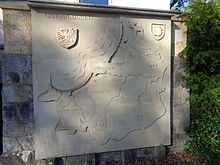 East Prussia relief at the Ostheim in Bad Pyrmont

The Landsmannschaft Ostpreußen e. V. ( LO ) based in Hamburg is an independent, non-denominational and non-partisan association of expellees . It was founded on October 3, 1948 by displaced and refugee East Prussians in Hamburg. The LO is a member of the Federation of Displaced Persons (BdV). Your spokesman has been Stephan Grigat since 2010 . The LO is recognized as a non-profit organization and is not funded with public funds.

The Landsmannschaft Ostpreußen is mainly active in cross-border cultural and encounter work as well as in historical and political journalism . The political concerns and activities of the Landsmannschaft in the recent past have included the creation of a center against evictions in Berlin, if possible with the participation of former BdV President Erika Steinbach , the implementation of German-Polish municipal political congresses and German-Russian forums , the preservation and Further development of the East Prussian State Museum in Lüneburg and the East Prussian Cultural Center in Ellingen. In 2009 the Landsmannschaft also set up the Future Foundation for East Prussia based in Hamburg from its reserves .

In the years after the turning point and the peaceful revolution in the GDR of 1989/90, the East Prussian Landsmannschaft, often in cooperation with the Lazarus Relief Organization or the Johanniter Unfallhilfe , set up 21 social stations with clothing stores and pharmacies in what is now Poland's part of East Prussia. During this time she organized and financed numerous aid supplies for hospitals, children's and old people's homes , supported wolf children , especially in Lithuania , as well as kindergartens and schools, including school meals; However, these activities have taken a back seat due to the economic development of Poland in recent years.

The highest honor awarded by the LO is the Prussian shield .

The statutes contain a commitment to international law in several places, but no (explicit) demand for the return of property or compensation. The statutes do not call for the reorganization of the former East Prussian territory to Germany.

The East Prussian Landsmannschaft consists of:

In addition to these corporate members, the Landsmannschaft can accept personal members according to the statutes.

The Landsmannschaft East Prussia has two organs, the East Prussian State Representation (OLV) and the federal executive board. The OLV usually meets once a year. With its committees and presidium, it has a structure similar to that of a parliament; in terms of association law, it is the LO's general assembly. Another body of the LO is the arbitral tribunal.

The LO also publishes the right-conservative to the new-right weekly newspaper Preussische Allgemeine Zeitung (until 2003: Das Ostpreußenblatt ) as an organ .

In February 2000, the Bund Young East Prussia , the association's official youth organization, was founded. The former youth organization Junge Landsmannschaft Ostpreußen (today: Junge Landsmannschaft Ostdeutschland ) was stripped of this status due to its right-wing extremist orientation, whereupon it joined the Witikobund . The Association of Young East Prussia has around 1000 members. The federal chairman is Tobias Link. Among other things, the BJO is committed to promoting international understanding among young people and is active in both the Federal Republic and East Prussia with seminars, leisure time, educational events and encounters between Polish, Russian and German young people. War grave care in East Prussia - often together with Polish youth - is one of the activities of the BJO. The association is committed to remembering the German history of East Prussia and maintaining contact with its current residents. Federal board member Christopher Roßmann (CDU) speaks out in favor of open borders and a European orientation of the Russian part of East Prussia.

In the run-up to the EU's eastward expansion, the Landsmannschaft demanded the withdrawal of the “ Bierut Decrees ”. Similar to the Beneš decrees in former Czechoslovakia , these decrees made the expulsions , expropriations and mistreatment of the German population in East Prussia , Silesia , Pomerania and East Brandenburg , contrary to international law , impunite.

See also : Flight and expulsion of Germans from Central and Eastern Europe 1945 to 1950