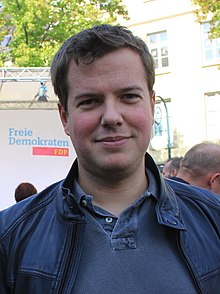 Becker grew up in Schauenburg in the Kassel district. After attending primary school in Elgershausen , he moved to the old-language Friedrichsgymnasium (FG) in Kassel in 1993, where he graduated from high school in 2002.

After his community service studied Becker from October 2003 to February 2009 Economics at the Georg-August University in Göttingen . He finished his studies in spring 2009 with a degree in economics . From 2008 to 2011 he worked at the University of Göttingen on a project aimed at networking between doctoral candidates and companies. In 2015 he received his doctorate with his doctoral thesis on the effect of federal structures in state innovation promotion .

Since 2015 he has been working for a medium-sized company in the tool industry in Burgwald, currently as Vice President for the Industrial Tools product segment in Europe and Asia and Managing Director of the subsidiary Dronco in Wunsiedel.

Becker was state chairman of the Hessian Young Liberals from 2004 to 2009 and since 2005 also an elected state board member of the FDP Hessen. Becker ran for the state parliament in 2008 and 2009, but he voluntarily took the last position on the list, because at this point he first wanted to finish his studies and not work as a professional politician.

In 2010 he was elected chairman of the Young Liberals at the Federal Congress in Bonn and re-elected in April 2011 and March 2012. He also worked on the new basic program of the FDP, which was adopted in 2013.

In October 2013 he announced that he would resign as JuLis chairman at the next federal congress. His successor was Alexander Hahn .

Becker himself claims to have become politically active because of the education and European policy. For example, he represents the demand for a European federal state as a long-term perspective for the EU. In doing so, however, he emphasizes the idea of ​​subsidiarity and advocates a relocation of competencies back to the national level if the tasks can be carried out more sensibly there. He is a member of the Young European Federalists .

Becker maintains a controversial style programmatically and also took a clear position on personal matters in the FDP. He was perceived for his sharply negative position against the minimum wage at the FDP federal party conference in May 2013. Even as the Hessian state chairman, Becker had successfully campaigned against the attitude of the FDP leadership for the abolition of tuition fees for the first degree and against clandestine online searches.

Federal Chairwoman of the Young Liberals