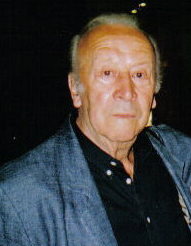 Leon Niemczyk tried to flee Stalinist Poland with his brother Ludwik in the late 1940s . They were caught together and imprisoned for trying to escape. After his release, Leon Niemczyk began to work as a shipyard worker in Gdansk . A workers' theater was set up there, where he gained his first experience as an actor. During one of the performances he was discovered by film people from Łódź .

Niemczyk had been one of the preeminent actors in Poland since the 1950s . He played among all the great Polish film directors. Some of his films are still legends of Polish cinema and known beyond Poland's borders. In 1962 he played the leading role in Roman Polański's early work The Knife in the Water . In total he starred in over 150 films. Other legendary films: Night Train (1959) by Jerzy Kawalerowicz , The Crusaders (1960) by Aleksander Ford based on the novel of the same name by Henryk Sienkiewicz , The Wolf (1983) and shortly before his death Inland Empire (2006) by David Lynch . He was also often seen in DEFA productions, for example as Rat Mentzel in the multi-part series Sachsens Glanz and Preussens Gloria and in various DEFA Indian films .

Niemczyk's star on the Walk of Fame in Łódź