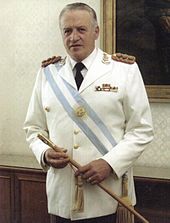 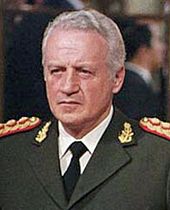 Galtiere speaks to a crowd on the balcony of Casa Rosada 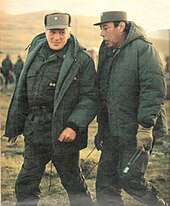 Leopoldo Fortunato Galtieri Castelli (born July 15, 1926 in Caseros , Province of Buenos Aires, † January 12, 2003 in Buenos Aires ) was a senior member of the military government of Argentina from 1976 to 1983 and de facto president of the country between 1981 and 1982 . The Batallón de Inteligencia 601 , a unit that was accused of murders and serious human rights violations, especially against left-wing opponents, was directly subordinate to him.

Galtieri was a descendant of Italian immigrants and decided in 1942 to learn the soldier's trade after graduating from school. In 1945 he left the military school as a sub-lieutenant in the Army Engineer Corps. He later received further training at the engineering officer school in Concepción / Uruguay and in 1949 again took part in basic engineering training in the American Canal Zone in Panama .

In 1957 Galtieri joined the Army General Staff , he completed another course in the USA in 1960 and was then transferred to the engineering unit's inspection department. In 1962 he moved to the staff of the 2nd Infantry Division and was appointed professor at the War Academy at the same time . In this position he worked until 1964 and then went to the engineering school in Concepción / Uruguay as deputy director. In late 1967 he was promoted to colonel and in 1968 took over a construction unit in the province of Santa Fe .

In 1970 he was promoted to deputy commander of the engineering force, and two years later, as brigadier general , he took over command of the IX Infantry Brigade. He then held other military commands.

He actively supported the military coup of 1976 by General Jorge Rafael Videla and from then on held leading positions in the military junta up to the position of active army chief. After President Roberto Viola hesitated to initiate democratization, Galtieri campaigned for his recall. At the end of 1981, he became President of Argentina, although as an active soldier (army chief), according to the junta's statutes, he should not have been allowed to take office in government. Due to the unstable economic situation at the time, the junta hoped to stabilize its power through a foreign policy success. He had been one of the most hated generals of the military dictatorship.

Therefore, he was the driving force behind the invasion of the Islas Malvinas claimed by Argentina in early April 1982, which led to the Falklands War between Argentina and Great Britain . Fearing a potential threat to the Argentine southern border from Chile , he mainly sent young soldiers and conscripts from the climatically warm north to conquer and further defend the islands. But these troops were not properly equipped for the cold and wet climate on the islands. Nevertheless, his calculation seemed to work, because on April 10, 1982 tens of thousands of people celebrated Galtieri for the return of the Islas Malvinas in the Plaza de Mayo and its popularity skyrocketed. At the end of April 1982 he personally visited the troops on Islas Malvinas.

British Prime Minister Margaret Thatcher , who was also in a low poll with her government, gave in and sent a huge fleet, including aircraft carriers and invasion ships, to the South Atlantic to recapture the islands. The capital of the Falkland Islands, Stanley , which had meanwhile been renamed Puerto Argentino by the Argentines , was recaptured by the British in June 1982, which finally sealed the Argentine defeat. On June 14, 1982, the drunk general admitted defeat on television in a sluggish voice, and since then Argentinian cartoonists have mostly drawn him with a whiskey glass in hand.

Galtieri was ousted within a few days. In late 1983, he was arrested and tried in a military court for human rights abuses during the Argentine military dictatorship and mismanagement during the Falklands War. The investigation report of the Argentine military was named after the investigating General Rattenbach. The Rattenbach report recommended that Galtieri be stripped of all military ranks and that he be shot . In 1986 he was sentenced to 12 years in prison.

In 1989, after only four years of luxury imprisonment behind barracks walls with a tennis court and swimming pool, he was pardoned by President Carlos Menem along with 39 other officers who had been convicted of crimes during the dictatorship .

Galtieri was married to Lucia Noei Gentile and had a son and two daughters for her. He was considered vain .

Galtieri died in Buenos Aires in 2003 after suffering from pancreatic cancer for a long time , after having been under house arrest for several years for his crimes during the military dictatorship.