Lydia Cabot was the daughter of Dr. Samuel Cabot III , a prominent Boston surgeon , and his wife, Hannah Lowell Jackson. Within the family she was called Lilla . Her family belonged to prestigious Boston society and in her mother's salon she came into contact with literary greats such as Ralph Waldo Emerson , Louisa May Alcott and James Russell Lowell at an early age . Thanks to the special gift of the hostess, who was also often called "Frau Doktor", people with the most varied of political views came together here.

Cabot received a comprehensive and excellent education, she studied classical literature , languages , poetry and music . There are some indications that she drew sketches at meetings with her friends, but received no training in the arts before 1884. Cabot was 13 years old when the Civil War (also known as the American Civil War ) began. Her parents were passionate abolitionists and took an active role in caring for injured soldiers and runaway slaves . When the Civil War ended, the Cobot family moved to a farm in Canton , Massachusetts . 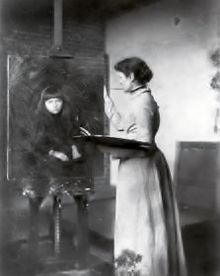 Lilla Cabot Perry in her studio, around 1890

In contrast to many other female painters, Perry only devoted herself to painting seriously after her wedding and the birth of her children . She was also one of the few American artists who lived and painted in Japan . In her work around 1889, after she had met Claude Monet (1840–1926), there was a change in style that was evident in both the technique and the motif. From then on Perry applied the paint directly and dealt with the landscape. Although Perry never achieved the fame of Mary Cassatt (1845–1926), she was internationally known and respected in artistic circles. The fact that Lilla Cabot Perry fell into oblivion after her death was partly due to her artistic orientation towards impressionism , which for a long time was considered less demanding.