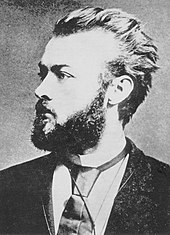 Maxmilián Pirner (born February 13, 1854 in Schüttenhofen , Kingdom of Bohemia , Austrian Empire , † April 2, 1924 in Prague , Czechoslovakia ) was a Bohemian painter and graphic artist . He was primarily a figure and portrait painter as well as an illustrator .

Maxmilián Pirner studied from 1872 to 1874 at the Prague Art Academy and from 1875 to 1879 at the Vienna Academy under Josef Mathias Trenkwald . He stayed in Vienna until 1887 and, despite certain successes, lived in seclusion, away from the action. From 1887 he was a teacher at the Academy of Fine Arts in Prague, where he worked as a professor from 1896.

Nonetheless, signs of a creative crisis emerged which expressed his general frustration with life. For Pirner, the connection between critical reflection and increased sensitivity was characteristic. Wherever these components were dynamically linked, his work became unconventional. Pirner's lifestyle also includes the subject, which is why an artist who is not closely connected to contemporary events in European metropolises and who rather deals with literature and philosophy can find appropriate artistic means for this. Pirner also enjoyed a high reputation abroad. Among other things, he was a founding member of the Vienna Secession and was for a short time an advocate of Art Nouveau in Prague . Among other things, he created designs for glass windows, diplomas and medals .

Among his students were the sculptor Alois Rieber .