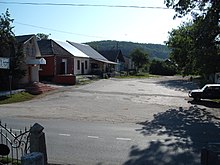 View into the village

Mynkiwzi the only village of the same district municipality in the historic region of Podolia in the east of Dunaivtsi Raion .

The village is situated on the banks of Uschyzja ( Ушиця ), a 122 km long, left tributary of the Dnister and the territorial road T-23-08 , over which the Rajonzentrum Dunaivtsi after 21 km to the west and Nova Ushytsia km to 14 in an easterly direction can be achieved. The Oblast capital Khmelnyzkyj is about 85 km north of the village.

Wooden synagogue in the 1920s

The village was first mentioned in writing in 1404.

A local museum is dedicated to the Polish aristocrat Ignacy Ścibor Marchocki (1755–1827), who founded his own "state" here at the end of the 18th century and was the first state in Eastern Europe to no longer have serfdom.

The wooden synagogue , built in 1776, was destroyed in World War II.

In 1939 the proportion of the Jewish population in the village was 46.5 percent, which corresponds to 1635 people. In the entire area there were 2,412 Jews, of whom only a few managed to leave the region before the Wehrmacht occupied the place on July 12, 1941. Immediately after the occupation, the Jews were ordered to register and in early August 1941 a ghetto was set up in the village. According to a report dated August 31, 1941, which the Higher SS and Police Leader Russia South Friedrich Jeckeln radioed to Reichsführer SS Heinrich Himmler , the 320 Police Battalion in Minkowzy carried out an action in which 2,200 Jews were shot. During this operation, the police battalion dissolved the ghetto in Mynkiwzi by collecting the Jewish residents on the main street with the participation of the local police and leading them to three already excavated mass graves, where they, also with the participation of the Ukrainian police, were taken to Groups of 10 to 15 people shot dead. This action may have been counted as part of the Kamenets-Podolsk massacre in later investigations . On March 28, 1944, Mynkiwzi was liberated by the Red Army .