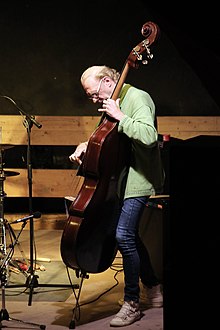 Nick Stephens (* 1946 in Sutton Cornfield ) is a British bassist and composer of free jazz and new improvisational music.

Stephens began his career as a bass guitarist in rhythm and blues clubs and bases in the US Army. In 1966 he switched to the double bass and played in the Midlands Youth Jazz Orchestra . In 1976 he began working with avant-garde drummer John Stevens : He played in his formation Away , in which Ron Herman was initially active as a further bassist . He also belonged to John Stevens' formations Dance Orchestra (partly with John Martyn ), Accent , Freebop (from 1985) and Fast Color (with Dudu Pukwana and Harry Beckett) on; he worked with Stevens until his death in 1994. He also pursued his own projects, such as the Nick Stephens Septet with the young Courtney Pine and the North Atlantic Drift ensemble with the Norwegian saxophonist Frode Gjerstad . As a composer he excelled on his 1988/89 album Live at Plow Stockwell , on which Jon Corbett , Annie Whitehead , Chris Biscoe and Mark Sanders participated.
In 1994 Stephens renewed the collaboration with Gjerstad; they played the music of John Stevens at a London festival; then Nick Stephens and Frode Gjerstad formed a quartet with drummer Terje Isungset and Paul Rutherford ( Calling Signals ). Later the drummer Louis Moholo and the Danish guitarist Hasse Poulsen joined them. After a few festival appearances and concerts in Norway and England, the album Calling Signals was created in 1996 .
In 2008 he played mostly in a trio with saxophonist Paul Dunmall and drummer Tony Marsh and in a trio with Frode Gjerstad and drummer Paal Nilssen-Love ; but also performed with Gjerstad's Circulasione Totale Orchestra .
Nick Stephens has also worked on recordings for the David Panton Trio and Jon Corbett.