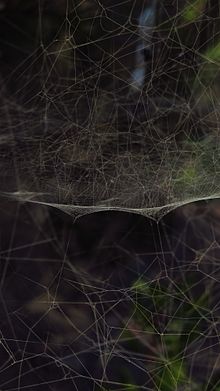 Web of the opuntia spider

Egg cocoons of the opuntia spider

The Cyrtophora Citricola ( Cyrtophora citricola ) is a frequently encountered in the Mediterranean spiders art from the family of Real orb weavers .

The opuntia spider is slightly smaller than the well-known garden spider , although the size difference between the sexes in Cyrtophora citricola is much larger: males are 2 to 4 mm long, females are 10 to 15 mm long.

The front body ( prosoma ) is single-colored, light beige-brown or black and very hairy white. The less densely hairy back of the body ( opisthosoma ) is elongated-oval and has three pairs of very noticeable humps. The cusps are located on the front edge, approximately at the level of the first third and at the end of the opisthosoma, and each point slightly outwards. The basic color of the opisthosoma is either quite uniformly yellowish brown or black, corresponding to the prosoma. It shows in the middle a band of irregular, dark and light-edged, narrow-lanceolate or oval spots and also three laterally arranged paired spots. These are blackish in brownish animals, but very strikingly bright white in black animals.

The legs of brownish animals are not very contrasting light / dark ringed, in black animals, however, they are also monochrome black.

The opuntia spider colonizes large parts of the tropics and subtropics of the Old World . On the American continent, the species was first detected in Colombia in 1996 , and it has apparently been spreading rapidly in the New World since then . It was detected in the Dominican Republic in 1999, in Florida in 2000, in Cuba and Brazil in 2003.

In Europe, the species occurs in Portugal , Spain , France , Italy including Sicily and Sardinia , in Greece and on Malta . Furthermore, Madeira and the Canary Islands settled.

In addition to the nominate form, three subspecies are distinguished:

Net construction and catching of prey

The nets of the opuntia spider are among the most complex spider webs - the females need several nights to build. The spider builds a horizontal web of wheels that is 50 to 60 centimeters in diameter. The center of the net is expanded in a funnel shape upwards; there is the hiding place of the spider. Radii are drawn outwards from this central funnel. If the distance between the radii exceeds about one millimeter, the spider draws another radius between them, so that the number of radii increases more and more from the inside out. A very narrow catch spiral is then attached to these radii, which, in contrast to all other orb-web spiders, consists only of a smooth thread and has no glue drops. This wheel net is firmly anchored at the bottom with tensioning threads. Numerous “stumbling threads” are drawn in over the cycle net, so that flying prey that hits it falls onto the cycle net. The spider then rushes up from below, grabs the prey from below through the web, wraps it up and carries it into its hiding place in the funnel.

In summer, the females create several cocoons, which are attached to one another above the central funnel, so that a sausage-shaped structure is created.

The species is common and not endangered in suitable habitats.