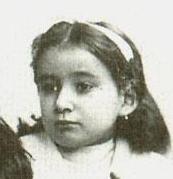 Ottilie "Ottla" Kafka , married Ottilie Davidová (born October 29, 1892 in Prague ; died 1943 in Auschwitz-Birkenau concentration camp ) was the youngest sister of Franz Kafka . She was closest to him from his relatives and supported him in difficult times.

After her school education, among other things, in an agricultural school, which Franz Kafka had decisively initiated, she lived and worked in the West Bohemian Zürau (today Siřem, municipality Blšany ) on an agricultural estate of her brother-in-law Karl Hermann. Franz Kafka, who was already suffering from pulmonary tuberculosis, lived with her from September 1917 to April 1918 and wrote Die Zürauer Aphorisms .

In July 1920, against her father's will, Ottla married the Czech Catholic Josef David, a colleague of Franz Kafka's worker's accident insurance. David was a lawyer and took over the management of the Association of Czech Private Insurance. Daughters Věra and Helene were born in 1921 and 1923, and Franz Kafka followed their development until his death in June 1924. Ottla Kafka's marriage was not a happy one. According to her daughter Věra Saudková, the father would have liked to lead a good middle-class life, whereas the mother wanted a household where the socially disadvantaged could always get a bowl of soup. Since Ottla was married to a non-Jew, she was temporarily protected , unlike her two sisters, who were initially deported to Lodz (Litzmannstadt) in October 1941 . The burden of helping her sisters, friends and close relatives with packing, of having watched them through the night before the evacuation and of having accompanied them to the collection point in order to then return to their own home, where everything seemed to be going on as normal, became hers unbearable. Her husband's situation was not easy either. Since, according to the Nazi racial ideology, he was considered to be “Jewish misfits”, he had to reckon with the loss of his job. He was also threatened with internment in the “camp for Aryan husbands of Jewish women” in Bystřice u Benešova . In February 1940 Josef David filed for divorce and in August 1942 Ottilie was divorced. The daughters did not find out about the divorce, which today gives rise to the assumption that it was possibly consensual. With the execution of the divorce act, Ottla lost her protection against the persecution of the Jews .

Like many other Jews from Prague Ottla was soon in the Theresienstadt concentration camp deported , where she worked as a social worker in an infant home. With the help of a Czech gendarme she was able to smuggle letters to her daughters. In these letters she had repeatedly expressed hope about an imminent exchange campaign for children from the Bialystok ghetto with whom she would be allowed. Such a humanitarian transport, she wrote, was planned to Switzerland or Sweden . Her daughters, who were barred from entering Theresienstadt as half-Jews, had moved to live with Karel Projsa, a friend from the communist youth organization and early Kafka admirer, and survived the war. In October 1943, Ottla Kafka, together with 52 other nurses, accompanied a group of children to Auschwitz as a voluntary assistant , where she was murdered a short time later.

Ottla's sisters Elli Kafka and Valli Kafka and other relatives were also victims of the Holocaust . A plaque on the family grave in the New Jewish Cemetery in Prague commemorates the three sisters.

The correspondence between Ottla and her brother has been preserved and was first published in 1974 (by Hartmut Binder and Klaus Wagenbach ).

In January 2011 it was announced that this correspondence as a whole was to be auctioned in April at a Berlin auction house. The German Literature Archive in Marbach then hoped in February 2011 to be able to acquire the correspondence with private support. Finally, the German Literature Archives Marbach and the Bodleian Library in Oxford jointly acquired the correspondence in April 2011. They thanked Ottla's heirs for their willingness to sell the letters before the auction and also the generous sponsor, who remained anonymous at his own request, for his selfless commitment got the fundraiser going .