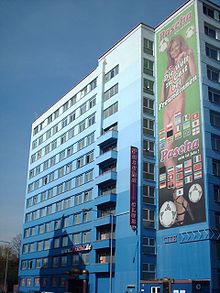 The pasha with the poster for the 2006 soccer world championship ; the flag of Iran and the flag of Saudi Arabia blackened after protests.

The Pascha is a brothel in Cologne . It is one of the largest whorehouses in Europe.

The first high-rise brothel in Europe was opened on January 10, 1972, according to other sources in 1974 as the nameless "Eros Center" in the Hornstrasse in the Neuehrenfeld district, which has become known as a result . Up until this point in time, the Cologne prostitutes mostly worked in the Kleine Brinkgasse in the middle of Cologne city center, which led to constant trouble with residents and business people.

The City Council of Cologne therefore decided to have a licensed operator build a high-rise with many small private rooms on urban land in order to be able to bundle and control prostitution there. The prostitutes fought for their right to stay in the city center and filed a lawsuit against the city, which the Higher Administrative Court dismissed. Business was good until the late 1970s, when women left the house in large numbers and went to private clubs. It was not until 1995, after a foreclosure auction and renaming to “Pascha”, that the number of customers rose again.

The ten-story house has 126 apartments, its own restaurant, beauty center, boutique, laundromat, tanning salon and bistros and publishes its own newspaper. Prostitutes from many nations work in the Pascha, and the house advertises that they offer a money-back guarantee in the event of dissatisfaction. A total of 150 women and 90 permanent employees work in the Pascha. The 7th floor is reserved exclusively for transsexual prostitutes.

In the basement, accessible via a separate entrance, the “Nightclub Pascha” was set up as a hall for dance, striptease and table dance shows . Concerts and other cultural events are also occasionally held there. In 2007 the gay and lesbian summer blood festival was to be opened in the Pascha. The opening event was postponed after protests. The operators of the Pascha have other brothels of the same name in Linz , Munich , Salzburg and Graz .

In 2003, a 28-year-old Thai prostitute was stabbed to death in a room at the Pasha. The 18-year-old perpetrator had pretended to be a suitor to rob the woman.

In a raid in April 2005, a firearm, ammunition and 5 g of cocaine were seized in the pasha . Of the 23 provisionally arrested persons, six were subsequently brought before the judge on suspicion of violating the Immigration Act ; Among those arrested were four girls who said they were between 14 and 15 years old. It is still unclear whether the girls were actually minors. There were no indications of forced prostitution .

On the outside of the building there was a large poster on the occasion of the 2006 World Cup , on which the flags of the 32 participating countries were shown. Because this also made it possible to see the Islamic creeds, which are inscribed on the flags of Saudi Arabia and Iran , angry Muslims appeared at the brothel operators, who protested that this was an insult to Muhammad . Since then, the flags of the two countries have been blackened.

In 2006, a 23-year-old prostitute was attacked with a knife by a client and almost died. The 20-year-old perpetrator stated that he was motivated to act by frustration at the deportation planned for the following day.

In 2010, three bouncers of the Pasha were sentenced to 18 months suspended sentence and a total of 6,000 euros in pain and suffering for dangerous bodily harm . Two other bouncers were acquitted. According to the indictment, the men beat up a 32-year-old Albanian in December 2008 in a pizzeria next to the Pasha.

In 2015, another Pasha prostitute was the victim of an attempted murder by a man who planned to rob her. The 42-year-old perpetrator choked the 33-year-old woman for minutes, which she barely survived because she managed to push a panic button.

In September 2017, 250 police officers raided the brothel for "serious crimes" on the day after the Pascha founder Hermann Müller was convicted of tax evasion and sentenced to three years and nine months in prison.