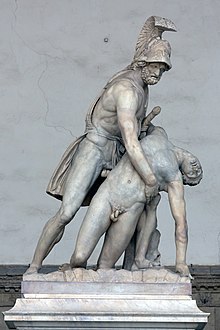 The corpse of Patroclus is recovered by Menelaus. Roman sculpture group, Florence

Patroclus ( Greek  Πάτροκλος “glory of the father”, Latin Patroclus ) is one of the Greek fighters before Troy in Greek mythology , son of Menoitios and Sthenele , friend and companion in arms of Achilles .

As a child he killed Kleitonymos , the son of Amphidamas, while playing dice in his hometown of Opus . His father escapes his revenge and brings him to Phthia to Peleus , who welcomes the boy in a friendly manner and educates him as his son's companion.

Patroclus follows Achilles to Troy and remains inactive for a long time like this one who resentfully withdrew from the fight [→ cf. Briseis , Iliad and Achilles ]. Even when the Trojans threateningly gain the upper hand and even harass the Achaeans' ships, Achilles does not allow himself to be changed. In a moment of extreme military need, he allows Patroclus to intervene in his stead. In the armor of Achilles, Patroclus throws himself into battle at the head of the Myrmidons . He succeeds in driving back the Trojans, killing many of them, including Sarpedon , king of the Lycians , and Kebriones , Hector's half-brother and chariot driver. But he is finally stunned by Apollon and partly disarmed, whereupon Euphorbos pierces him from behind with a lance. Hector finally kills him, takes Achilles' shining armor from the fallen man and claims it as prey. With the protective help of Ajax the Great Menelaus snatches the corpse of Patroclus from the enemies, with Ajax killing the Euphorbos.

Achilles, beside himself in the pain of the death of his beloved friend, renounces anger and returns to battle to avenge Patroclus. He kills Hector in battle outside the walls of Troy, knowing the weak point of his old armor, and thus initiates the turning point of the war. Achilles sacrifices twelve young Trojans at the stake of Patroclus and pulls the corpse of Hector tied to the back of his chariot around his friend's tomb for twelve days.

Relationship between Achilles and Patroclus

In Homer's Iliad , the relationship between Achilles and Patroclus is described as a close friendship that would extend beyond death. Because after the lamentation of the dead Patroclus, he appears to the friend in a dream and asks him for the funeral. Achilles, because he too will die before Troy, is to see to it that both of their bones are buried in the same golden urn.

In Aeschylus is the first of a homosexual relationship talk. In ancient Greece, homosexuality was common in the form of boyfriends ( pederasty ). The “lover” (Erastes) was usually at least thirty years old and was also a kind of educator for the twelve to eighteen year old “lover” ( Eromenos ). According to Aeschylus, Achilles takes on the role of the "lover" and Patroclus that of the "beloved". Plato criticized Aeschylus in the symposium by interpreting the relationship between Achilles and Patroclus the other way round: Achilles was the "beloved" because he was younger and more beautiful than Patroclus. Plato interprets Achilles' revenge for Patroclus' death as a result of Achilles' dependence on his "lover". Also the Sosias bowl from around 500 BC. The Sosias painter who was active in BC shows Patroclus bearded and identifies him as the older of the unbearded Achilles.

The French painter Jacques-Louis David (1748–1825) created an oil painting in Rome around 1780 that shows Achilles' lover. The asteroid (617) Patroclus , discovered by August Kopff in Heidelberg on October 17, 1906 , is named after Patroclus . “Patroklos” is the title of a play by Robert Hohlbaum that appeared in 1944 and was not performed during the Nazi era.