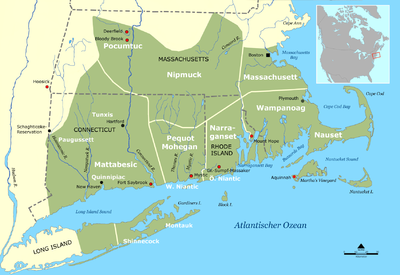 Site of the Pequot War in southern New England

The Pequot War of 1637 was the first serious armed conflict between the Native Americans of New England and the British colonists . The war that stood at the beginning of the Indian Wars for the subjugation of the Indians of North America by the European settlers ended with the almost complete annihilation of the Pequot Indians.

Early ties between the English colonies of Plymouth , New England ( founded by the Pilgrim Fathers in 1621 ) and Jamestown , Virginia (a British colony since 1624 ), the two core areas of English settlement in North America, and the indigenous people were similar. The settlers, Protestants and Puritans who had fled England , were dependent on Indian hospitality, Indian food and Indian experience, but became increasingly arrogant, demanding and insensitive to the rights of the indigenous people. Those responsible in Plymouth were able to avert the first hostilities with the Indians by concluding a contract between the colony and Massasoit . Massasoit was the war chief of the Wampanoag who visited the struggling colony in 1621. In the wording of the treaty, both sides undertook to keep the peace and punish breaches of treaty.

Nevertheless, under the leadership of Captain Miles Standish from the Plymouth Colony and Captain John Smith from the Virginia Colony , settlers penetrated the hinterland, threatened the Indian leaders, plundered their stores and extorted or exchanged food, sometimes under duress. The initially peaceful relationship between the original inhabitants of the region and European immigrants deteriorated.

The settlers in Plymouth did not hesitate to use force against the Indians, often with questionable justification, as in the case of Standish's attack on the Indians on Massachusetts Bay in the winter of 1622-23 when riots broke out in a colony under Thomas Weston. Governor William Bradford justified this preemptive strike on the basis of a reported Massachusetts conspiracy against Weston's people and the Pilgrim Fathers' colony. Bradford admitted that Weston's men had stolen from the Indians, but he accepted the elimination of the conspirators before they could strike. The colonists' information about the alleged conspiracy is said to have come from their ally Massasoit , the sachem of the Wampanoag Indians. The fear of conspiracies or attacks by the Indians was widespread among the colonists.

The Pilgrim Fathers demonstrated their readiness to use violence against those who violated their convictions with their attack on the colony of Thomas Morton , who in 1625 had erected a maypole in Merrymount near what is now Quincy . He lived there in close contact with the Indians and exchanged European goods for skins and Puritan values ​​for Indian concessions. The small colony was destroyed and Morton chased away. Morton's colony was an insult to Puritan morals. One interpretation is that he was a threat to the poor souls of the colonists. The colonial leadership felt neither guilty of the destruction of Morton's colony nor of any Indian group that they saw threatened their values.

The conflict between settlers and Pequot

The settlement area of ​​the Pequot lay between the Thames River in the west and today's western border of the state of Rhode Island in the east. The Connecticut colony bordered the area to the west, Plymouth to the east, and Massachusetts to the north.

In 1634, an English crook , Captain John Stone, was killed by the Western Niantic , allied with the Pequot. This took the leadership of the Massachusetts Bay Colony as an opportunity to make inappropriate and unfounded demands on the Pequot. A treaty signed on November 1, 1634 temporarily prevented a war.

When another ship's captain named John Oldham was killed by some Narraganset on Block Island on July 20, 1636 , the colony's leadership sent an expedition of 80 volunteers under John Endecott , John Underhill and William Turner with orders to block the Indian warriors Kill Iceland, capture the women and children, and occupy the island. Following this punitive expedition, the settlers drove back to the mainland, moved to the Pequot country and demanded the extradition of the murderers from Captain Stone and other Englishmen, plus 1,000 fathoms (1 thread = 1.83 m) of wampum as reparation and some children as Hostages. If the Pequot refused, they would face punishment. Governor John Winthrop later stated that the original intention was to send Endecott's forces only to Block Island, "and our march to the Pequot was in the hope of getting them to negotiate and to a peaceful end . "

The expedition was not very successful, except that it ended the peace that had existed between the Pequot and the English and put the life of the crew of Fort Saybrook at the mouth of the Connecticut River in danger. It was under the command of Lieutenant Lion Gardiner , who was outraged by Endecott's hasty and ineffective search and extermination against the Pequot. After Endecott's departure, the Indians raided remote Connecticut settlements in retaliation and suffered the consequences. When the Pequot realized that the Connecticut and Massachusetts settlers were adamant and threatened their wives and children with death, they sought to renew their previous alliance with the Narraganset and unite with them in the fight against the colonists. By chance Roger Williams managed to interrupt a council meeting in which the Pequot and Narraganset wanted to settle their differences. Instead, he offered the Narraganset an alliance against the Pequot. The Narraganset followed his offer and placed themselves under the orders of the colonists, which not only led to the destruction of the Pequot, but ultimately to their own.

On the English side, several independent British colonies were involved in this conflict, each with its own leadership:

In addition to the Pequot, a number of other Indian tribes were involved, either through alliances or close ties: 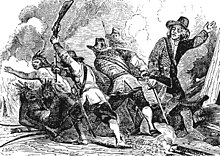 Attack on the fort on the Mystic River, depiction from the 17th century.

On May 1, 1637, the leadership of the Connecticut Colony declared the offensive war against the Pequot. Both Connecticut and Massachusetts launched campaigns against the Indians, each colony hoping to destroy that nation before the others. According to historian Francis Jennings, due to the unreliability of his troops, Captain John Mason decided to avoid combat and focus on Indian civilians. Connecticut Mason marched with 90 English and several hundred Native American allies to a fortified Pequot village on the Mystic River . On May 26th, the fort was surrounded by the besiegers and set on fire. The residents tried to flee, but were driven back into the flames. The report of an eyewitness has come down to us:

More than 500 Indians were roasting in the fire and rivers of blood seeped through the palisades. The stench was terrible, but the victory was a sweet sacrifice and we all prayed to God to thank Him for his assistance.

The number of those killed is given in recent research with up to 700. How many Niantic and Narraganset were killed in the ensuing skirmishes is unknown.

Captain Mason, who had the command to exterminate the Pequot, now pursued the fled Indians with his command, killed them or put them in chains. On July 28th, the last large group of fleeing Pequot was destroyed near New Haven .

The other Pequot left their villages and mostly fled in small groups to neighboring tribes, where they were either taken in or killed, for example by Mohegan and Narraganset warriors. The largest group under the leadership of their sachem Sassacus fled to the Metoac on Long Island, with whom they were not allowed to stay. So he led his approximately 400 remaining tribal members along the coast west to the Dutch in New Amsterdam .

In mid-June, Captain John Mason was sent out again and marched with 160 colonists and 40 Mohegan scouts under their Sachem Uncas towards the fled Pequot. In a swamp near what is now Fairfield , the Pequot were surrounded, but refused to give up without a fight. The women and children were then allowed to leave the swamp. In the ensuing battle 180 Pequot were killed or captured, but Sassacus managed to escape with around 80 warriors. They fled west to the Mohawk in what is now New York State . However, they had experienced the fighting power of the English, killed Sassacus and sent his head to Hartford , the capital of the young colony Connecticut. The area near Guilford in which this happened is, even today, "Sachem's Head" (Eng. Head of the Sachem ).

On September 21, 1638, the victorious Indian allies signed a treaty with the colonists that came to be known as "the First Treaty of Hartford" . The younger Pequot prisoners were distributed as slaves to the Mohegan, Narraganset, and Metoac; the remainder became servants to colonists in Connecticut and Massachusetts. The English claimed the land of the Pequot, who were officially designated as "no longer existent" .

The Indians of southern New England were appalled at the merciless warfare of the English, the killing or enslavement of all surviving Pequot, including some who had voluntarily surrendered to the Narraganset in order to be accepted into their tribe. The victory over the Pequot and the attempted extermination had a profound effect on the other Indian peoples of southern New England. Because destruction to the point of complete extermination of the enemy was something completely unknown to them. You fought an enemy in battle, but after victory you let go of him. They had never seen fights in which an entire people would die. They stood in disgust at what had happened as the British colonists were driving women, old people and even children back into the fire, trying to pursue and kill anyone who had fled.

After the Pequot War there was a longer period of peace, as no tribe dared to rebel against the British for a generation. It wasn't until 1675, with the King Philip's War , that the next war broke out.

The North American harvest festival - English Thanksgiving - is sometimes associated with the Pequot war. The Pilgrim Fathers, it is reported, proclaimed their second formal harvest festival in 1637. A preacher in Hartford declared June 15, 1637 a day of prayer and thanks for the safe return of the Militia from Mystic. However, it was in no way a general Puritan holiday, and Hartford only had 450 residents at the time.