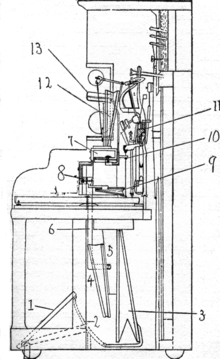 Technique of a pianola

A pianola or player piano is a self-playing device for pianos. The name Pianola is originally a brand name of the Aeolian Company in New York . The brand name Pianola became so well known that it became the name for the entire product category ; in Europe this was also the case for the brand name Phonola .

The first pianola was built in Detroit in 1895 by Edwin Scott Votey . The pianola cannot be regarded as his invention, but it is undoubtedly due to him that he made good use of a multitude of existing techniques to build the first working mechanical piano. Votey was then hired by the Aeolian Company, which launched the instrument in the US in 1897 and in Europe in 1899.

In Germany, the Hupfeld company in Leipzig had been manufacturing a similar, already further developed system since 1902, the so-called Phonola, which was market-leading in Germany and Europe. The piano rolls, several hundred thousand different titles worldwide and from all manufacturers, represent one of the most valuable archives of pianistic art today. Above all, the so-called artist rolls, which were written by well-known composers and pianists, e. B. Edvard Grieg , Claude Debussy and Sergei Rachmaninow were hand-recorded, are also of great importance for interpretation research.

A more sophisticated type of self-playing piano are the art play pianos , e.g. B. Animatic Phonola (Hupfeld), Ducanola (Philipps), and the reproduction pianos , e.g. B. the Welte-Mignon , DEA and Tri-Phonola from Hupfeld (Leipzig), DUCA from Philipps (Frankfurt), Duo-Art from Aeolian and Ampico . By 1930, over two million self-playing instruments and push-up buttons were manufactured worldwide. At times, more pianola were produced than pianos.

Since about 1926 these instruments were in a predatory competition against electric record players and the radio , which were much cheaper to manufacture and much smaller. In addition, people's leisure and consumer behavior changed significantly in favor of z. B. Sports and other leisure activities, so that the encouragement to make music on the piano, be it as a handheld instrument or as a pianola, has decreased significantly. Due to the Great Depression in 1929, the mechanical musical instruments industry collapsed, and only a few companies in the branch survived.

The fascination for self-playing pianos has persisted to this day. Leading manufacturers such as Steinway & Sons with the Spirio system, or Yamaha with Enspire, now offer digital pianolas.

In the case of the apparatus , pre-made pieces of music are played on the instruments by means of punched paper strips, the so-called piano rolls or piano rolls. The suction air was initially generated by means of two pedals on the piano or grand piano, similar to those on the harmonium , and later by an electric motor. In this case one speaks of the electric piano , English pianola piano .

The first player pianos were Vorsetzer . These did not contain any piano technology, but played with padded wooden fingers on an existing piano or grand piano in front of which they were placed or placed.

Later there were also pianolas in which the action was built into a normal piano or grand piano. In front of the pianola there was now space for a pianolist who could influence the emphasis, volume and speed of the music when playing. Experienced pianolists can use the pianola to reproduce music so perfectly that even connoisseurs hardly notice the difference to a hand-played piece of music.

Numerous composers have written pieces for self-playing pianos, for example Igor Stravinsky and Alfredo Casella for pianola, Paul Hindemith and Ernst Toch for the Welte-Mignon reproduction piano . By Percy Grainger , there is a arranged by him for pianola version of Shepherd's Hey. In July 1927 George Antheil arranged the first part of his Ballet mécanique for Welte-Mignon. A composer who dealt almost exclusively with compositions for player piano was Conlon Nancarrow .

All over the world there are public and private museums showing pianola exhibits. In Germany these include: B. the Deutsches Museum in Munich, the Augustinermuseum in Freiburg, the Grassi Museum in Leipzig, as well as the Technik Museum in Sinsheim. Other outstanding collections can be found in the Nethercutt Collection near Los Angeles (USA), in the Music Automaton Museum in Seewen (Switzerland), and in the Moscow Museum Collection (Russia). In Amsterdam there is the Pianola Museum with more than 20,000 piano rolls and around 50 musical instruments. Many such instruments can also be seen and heard in the Sound Machine Museum in Dürnten (Switzerland). In German jukebox museum in Bruchsal player pianos are on display. A small collection of jukeboxes and self-playing pianos can be seen and heard in the Museum of Music History at Beeskow Castle in Brandenburg.

In many countries there are associations with numerous members who maintain and maintain the achievements of the pianola era. These include B. the Society for Self-Playing Musical Instruments e. V. (GSM) in Germany, the Automatic Musical Instruments Collectors Association (AMICA) in the USA, the Player Piano Group (PPG) in England, the Nederlandse Pianola Vereniging (NPV) in the Netherlands, the Association des Amis des Instruments et de la Musique Mécanique (AAIMM) in France and the Associazione Musica Meccanica Italiana (AMMI) in Italy.

In recent years, global research has taken up the subject of pianola and piano rolls. Leading universities such as B. Stanford University (USA) and the Bern University of the Arts (Switzerland) deal extensively with these topics. Global Piano Roll Meetings have been held regularly since 2018, where leading experts from around the world discuss and further research the innovations in technology and piano music brought about by the pianola.

In the song Ich bin die fesche Lola by Marlene Dietrich the pianola found its way into the text. The pianola was mentioned in the song Joe's Pianola on the 1977 album Checkpoint by the British band Sailor .