The quarries. Painting by George Catlin , 1836 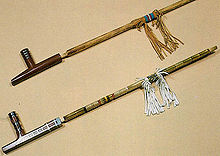 Pipestone National Monument is a memorial of the type of a national monument in the southwest of the US state Minnesota , near the border with South Dakota . It preserves the quarries of the "holy claystone", from which the Plains Indians cut the heads of their calumets and still do today.

The quarries were in 1928 by the Yankton - Sioux to the Federal Government sold, in 1937 the National Monument was established. It is managed by the National Park Service and is one of the NPS's small facilities in terms of size and number of visitors.

The red stone in Pipestone is catlinite. This special clay stone is almost free of quartz and is only found in today's protected area. It lies in thin layers under and between much thicker layers of quartzite from the Statherium , about 1630–1750 mya . Both the so-called Sioux quartzite and the catlinite originated from sediments , the quartzite emerged from sands over a long period of time, the quartz components of which combined under pressure and thus reached the hardness of steel. So it is a metamorphic rock . The catlinite consists of pyrophyllite , diaspore , muscovite and kaolinite . Traces of hematite give the stone its red color. It is much softer than quartzite and could therefore also be carved with bone tools . Only five thin layers of catlinite in a narrow strip about one kilometer in length are known.

Catlinit is named after George Catlin , a painter and author who went to the western United States in the 1830s and also reported on the mythology of Native American pipes.

The Pipestone quarries were opened about 3000 years ago. Catlinite artifacts have been found in a vast area stretching from present-day Ohio to South Dakota and the Kansas River . They were controlled by the Yankton Sioux since the early 18th century . They mined the claystone, recognized by all Plains Indians as the best material for their pipes, and traded it across the Great Plains . Leaning on the stone and other goods, the Yankton tried to subdue other peoples further west and to deny them access to their area and its resources.

It was not until the 19th century that whites reported about the quarries. They had known the pipes and the stone since the 17th century, but the origin of the material was of little interest to them. The first more detailed report was written in 1831 or 1832, and around 1835 Joseph LaFramboise, a trader for the American Fur Company and partly Indian himself, obtained mudstone from the quarries. In 1836 George Catlin came to the area and created a well-known painting showing the quartzite cliff in the background, in front of which Indians are working in a quarry. The boulders in the picture shape the area to this day. Catlin also reported extensively on the spiritual meaning of the pipe and the whistle stone.

The shapes of the pipe bowls continued to develop around the same time. Animal and human figures, round disc shapes and the typical T-shape were created. The whistles were popular with whites and the carving also gained economic importance through its ceremonial function.

In 1855 Henry Wadsworth Longfellow wrote his epic poem The Song of Hiawatha , which was largely based on the reports of Catlin. It begins at the quarries with the deity Gitche Manito , who smokes the calumet made of pipe stone and calls on all Indians to cooperate and be peaceful. The quarries now became a well-known mythological place in the minds of whites, even if they themselves were hardly known.

In 1838 Joseph Nicollet and John Charles Fremont came to the quarries on a US Army expedition; six members of her department left their names on the quartzite cliff, where they can still be seen today. And Nicollet published the first map showing the quarries. With the growing popularity, so did the pressure of whites on the Indians of the region. In 1851 some Sioux peoples signed treaties obliging them to emigrate to the west and leave their ancestral territories to the whites. The Yankton also signed in 1858 after their chiefs traveled to Washington, where they were given permanent rights to use the quarries. For them, 650 acres were designated around the quarries, about 263 hectares . The people moved about 250 km west to a reservation in the Dakota Territory , near Fort Randall , in what is now Charles Mix County , South Dakota .

In 1859 the area was surveyed and the land reserved for the Yankton was shown on the map. The government did nothing to protect the quarries when more and more whites poured into the region after the contract was signed. In 1862 the Hubbell and Hawley company won large quantities of whistle stone, which it traded for bison leather to various western Indian peoples. From 1871 the first settlers under the Homestead Act settled in the region, one of whom had a property registered within the Indian land. In 1876 they founded the town of Pipestone in the immediate vicinity of the eponymous quarries, which developed into a regional trading center. In the same year the first conflicts arose over the area of ​​the Indians. In 1880 there was massive commercial quarrying of quartzite as a building material just within the Indian territory. In addition, the homesteader won his trial in the first instance, even though he too had built within the land reserved for the Yankton.

Sioux demonstrate the carving work at the visitor center

The National Park Service regulates the mining of catlinite in the 54 pits in the area. Any federally recognized Indian in the United States can apply for a mining permit. There are annual permits, which can be extended, and short-term permits for a month, which are usually applied for for personal use. The waiting period is around four years for temporary permits and six or more years for a year-round quarry.

The whistle stone is obtained exclusively by hand. To do this, the steel-hard quartzite has to be knocked out in order to get to the catlinite. The pits are between four and six meters deep.

In the Visitor Center, visitors will find an exhibition on the history and culture of the region and can watch Indian craftsmen carving. The pits are located in one of the very few original and never agricultural high grass prairies in North America. A small river flows through the reserve.