Počaply (German Potschapl on the Elbe ) is a district of the city of Terezín in the Czech Republic .

That five kilometers southeast of Litoměřice in 144  m . located village is on the left bank of the Elbe opposite the Křemín (244 m). It is three kilometers to the southwest to the city of Terezín .

Other neighboring towns are České Kopisty in the west, Třeboutice in the north on the opposite side of the Elbe, Křešice and Nučnice in the east. Nučničky and Travčice are to the south .

The place, first mentioned in 1262, has been in the land register of the Břevnov monastery since 1406 . The property was administered by the monastic estate of Hrdly . Only during the Hussite Wars did the village have other owners and came back to the monastery in 1525. During this time Počaply gained importance through the monastic Elbe ferry to Třeboutice. The monastery owned the fishing rights on the left bank of the Elbe. During the Thirty Years' War, the village was repeatedly pillaged by various troops passing through. Its inhabitants lived mainly from agriculture and animal husbandry as well as fishing.

In 1780 the construction of the fortress Theresienstadt began southwest of Počaply and in the following year the resettlement of the villages Deutsch Kopist and Drabschitz took place there . In 1860 the river was straightened and the ditch below the church was created. In 1880 there were 193 inhabitants in Počaply, in 1890 there were 211. 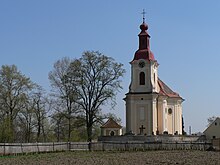 The parish church was built on an elevated point directly on the Elbe. After its destruction in the Hussite Wars, it was rebuilt at the end of the 15th century. In the course of time, the St. Adalbert Church was redesigned several times; It received its baroque shape between 1724 and 1726 according to plans by Kilian Ignaz Dientzenhofer . The building, which stands out clearly from the broad plain, is an important cultural monument. The church was restored around 2000 and again in 2002 to repair the flood damage suffered that year.