Several very similar, regionally widespread greyhound-like hunting dog breeds are referred to as Podenco in Spanish . Podencos were originally bred in the Iberian Peninsula , the Balearic Islands, and the Canary Islands . The common spelling in Portugal as well as in Spanish Galicia is Podengo . The name Podenco or Podengo still has another designation that indicates the regional origin of the respective breed, for example Podenco Canario , the Podenco from the Canary Islands, or Podengo Português , the Podengo from Portugal. 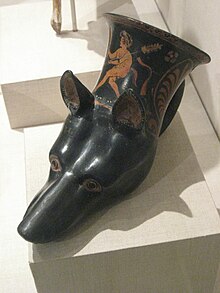 The Tesem , that ancient breed to which the Egyptians had already placed a monument in their tombs, is often said to be the progenitor of the graceful Mediterranean hunting dogs of the Podencos type. Representations from around 3800-3600 BC. BC show a standing-eared, curly-tailed, greyhound-like dog, which suggests a similarity to today's Podencos / Podengos. Ancient sailors like the Phoenicians and Carthaginians are said to have been responsible for its spread.

In particular, the approx. 70 cm tall Podenco Ibicenco from the Balearic Islands and the Kelb tal-Fenek from Malta are often regarded as his descendants; the latter is from the FCI even officially Pharaoh Hound ( Pharaoh Hound called).

However, there is no scientific evidence for this assumption, so it is also conceivable that the different breeds go back to the pariah dogs, which are widespread in the entire Mediterranean region and in large parts of Africa , and have developed in parallel due to similar topographical conditions.

All representatives of this group of Mediterranean dog breeds stand out for their bat-like erect ears, which appear even larger due to the slim body shape of most of the varieties. Some breeds come in rough-haired and smooth-haired variants, with the straight-haired being more common. The most common colors are red with white, white with red, and honey-colored for Podengo Português.

Since the dogs of this breed group are not pure sight hunters, they are not counted among the greyhounds (FCI group 10), although they have a similar physique. The FCI assigns these breeds to group 5 "Spitz and primitive dogs", section "Primitive types, dogs for hunting use". However, they are looked after by the breed clubs for greyhounds in most European countries and can take part in greyhound sports. They start competitions in Switzerland under the heading "Mediterranean Greyhounds".

In a broader sense, one can also count the related breeds outside of Spain and Portugal in this group, namely the Cirneco dell'Etna from Sicily , the Pharaoh's dog (Kelb tal-Fenek) from Malta (see above) and the Kritos Lagonikos, which are not yet recognized by the FCI from Crete .

The independence of these dogs makes it difficult to keep them as companion dogs : in the house they are typically calm, gentle contemporaries, but outside they often show pronounced hunting behavior.

Freewheeling is essential for species-appropriate husbandry. Depending on the animal, it can be differently difficult to let a Podenco run free. Another important factor is the initiative and consistency of the owner.

In the countries of origin, the Podencos or Podengos are used to hunt rabbits without weapons and are only bred for this. A pack usually consists of one male and up to ten females. The dogs usually work together without conflict, and disputes about the prey are rarely observed. The dogs choose their own tasks at will: Some tend to rummage in the bushes, others move around the bushes and ask what runs out. The podenqueros help the dogs with this. In some regions ferrets are used for support, in Andalusia the hunt is also carried out in combination with the short- barreled maneto . The larger breed representatives are very powerful and extremely sure-footed.

Podencos are solitary hunters , so hunting dogs in the truest sense of the word: They hunt and catch the prey independently and often bring it back to their owner alive: They hunt "with a soft mouth".

The dogs of this breed group are not only sight hunters, but they also hunt by hearing or with their nose. They also understand how to combine these three options perfectly.

The word Podenco means a hound in Spanish; in some regions it also has the more general meaning of hunting dog. The common spelling in Portugal and in Spanish Galicia is Podengo.

In their homeland, these breeds are anything but rare. Most of them, however, are not bred according to the more recent breed standards, but have been more typical of the region for a long time, based on needs and functions.

In the house, the dogs of this breed group are usually rather inconspicuous and cuddly types. However, when it goes outside, they show their nature as hunting dogs. They are not quiet family companion dogs . The training of a podenco requires a lot of patience over a long period of time. Dog schools that really know their way around these dogs are also rare.

Due to the independence of these dogs, keeping them in Germany can be difficult, but with the right consistency it is quite possible. Methods of positive reinforcement are particularly suitable for education . The greyhound racetrack or coursing , where the dogs are allowed to rush in a controlled manner, is an approximate substitute for hunting .

At the moment (2007) most of the Podencos in Germany come almost exclusively from animal welfare institutions. This is because the animals in Spain are often kept under poor conditions and are simply abandoned or even killed in a cruel manner after the hunting season. Various organizations therefore bring the animals to Germany. Therefore, only a few dogs are registered with the responsible "German Greyhound Breeding and Racing Association" (DWZRV). These podencos can occasionally be found on the racetrack, coursing or at breeding shows .