The position angle is an indication of direction in the sky, based on the direction to the north celestial pole.

Under position angle understand astronomers an indication of direction in the equatorial coordinate system ( right ascension and declination ), based on the direction to the north pole of the sky relates.

If the objects 1 and 2 have the equatorial coordinates α 1 , δ 1 and α 2 , δ 2 , the position angle of object 1 with respect to object 2 can be calculated by

If the denominator of the fraction is negative, add 180 ° to the result to bring the angle into the correct range between 90 ° and 270 °.

If necessary, whole-number multiples of 360 ° can always be added or subtracted in order to bring the result into the desired range. If, in particular, the arctangent produces a negative angle, an equivalent positive angle can be achieved by adding 360 °. 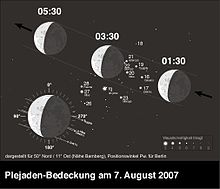 The position angle is used to describe the relative position of two objects or directions of movement in the starry sky and is mainly used for the following information:

The sine law of spherical trigonometry provides the relationship

This formula could already be solved for the P sought . However, knowing sin ( P ) does not yet uniquely determine P. P can come from all four quadrants of the full circle and there are usually two angles in the full circle from different quadrants which have the same sine value, so that the determination of the angle from the known sine value is not unambiguous. The usual implementations of the arcsine supply an angle in the range −90 ° ... + 90 °, so that a subsequent correction in another quadrant may be necessary.

Instead of cumbersome geometrical considerations, one usually uses the fact that an angle can be clearly determined if its sine and cosine values ​​are known. The correct quadrant can be clearly identified from their combination of signs .

The sine-cosine theorem provides the relationship

Division of the two equations yields

The correct quadrant can be determined by considering the signs of the denominator and numerator separately . Some programming languages have a variant of the arctangent function which does this automatically (often referred to as arctan2 or atan2). If only the usual arctangent function is available, it takes the sign of the total fraction into account. The user then has to add 180 ° as a quadrant correction if the denominator of the fraction is negative.

The factor could be shortened in the fraction because the declination δ 1 comes from the range −90 ° ... + 90 ° and its cosine can therefore not become negative, so shortening does not affect the quadrant determination.

To ascertain that the calculation formula is also valid if the angle P in the spherical triangle is greater than 180 °, consider the complementary triangle, the angle 360 ° - P contains. The resulting negative signs are canceled out in the formula derivation and the resulting formula is identical to the one given at the beginning.