This article deals with the animal quagga, for the routing software of the same name see Quagga (software) .

The quagga ( Equus quagga quagga ) is an extinct zebra shape. It is considered a southern subspecies of the plains zebra ( Equus quagga ), which is characterized by a reduction in stripes on the trunk and legs as much as possible compared to other zebra forms. The quagga was exterminated by humans at the end of the 19th century .

The original description of the quaggas called the animal a "hybrid form of horse and zebra", which reflects the external appearance well, but has nothing to do with the actual relationships. Only the head and neck were heavily striped in black and white. Towards the fuselage the stripes became paler and merged into a solid red-brown. But there were also animals with clear stripes up to the back of the body. The legs weren't streaked. It was up to 1.30 meters tall ( stick measure ). 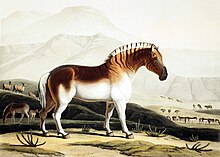 The quagga was widespread in South Africa and is said to have been one of the most common large mammals until the 17th century. Then the excessive hunting began, in which thousands of quaggas were shot. Farmers viewed wild animals as food competitors for their cattle , but the animals were also hunted for meat and leather. South Africa was also regarded by members of the financially well-to-do upper class as a hunting paradise, as a result of which many animals were killed for "sporting" motives.

By 1850 the quagga south of the Orange River became extinct. The remaining wild quagga populations grazed in the Orange Free State , but these populations were also wiped out. The last wild quagga is estimated to have been shot in the late 1870s; after the drought of 1877, which killed smaller remaining populations, the wild quagga was considered extinct. The last animal in captivity died on August 12, 1883 in the Artis Zoo in Amsterdam . However, the German Schutztruppe officer Victor Franke reported in his diary entries in 1901 about smaller quagga herds that he claims to have observed in what was then German South West Africa . Franke writes in several places that he couldn't bring himself to shoot the "beautiful and wonderful" quaggas.

The quagga inhabited the drier grassland areas in South Africa. The northern limit of distribution seems to have been the Orange, in the east the Vaal , and the southern limit is assumed to be the Great Kei River .

The systematic position of the quaggas was and is controversial. The doctrine to classify the quagga as a subspecies was supported by genetic studies of museum material in the 1980s. The doctrinal opinion, especially widespread in the Anglo-Saxon region, that the quagga should be classified as a separate species, does not support the genetic data, but these are viewed very critically by supporters of the species status for the quagga due to the limited database.

As early as the 1960s, it was occasionally classified as a subspecies of the plains zebra. But in 1980 DK Bennett tried to analyze the shape of the skull and came to the conclusion that the quagga must be much more closely related to the domestic horse than to any kind of zebra.

In order to finally clarify the question, four old museum specimens were taken from tissue samples from which DNA fragments could be extracted. These were almost identical to samples of the plains zebra, so that the conclusion was drawn that the quagga was a subspecies of the plains zebra.

However, this conclusion is still not entirely undisputed. In their analysis for the IUCN ( Status and Action Plan for the Plains Zebra ), Mace A. Hack, Rod East and Dan I. Rubenstein originally criticized that a genetic analysis based on such fragmentary samples is hardly meaningful and that the quagga because of its Color and form otherness must be given the status of a separate species. Investigations from 2004 also showed a position of the quaggas as a subspecies of the plains zebra from a morphological and anatomical point of view, so that this is also recognized by the IUCN today.

In a recent study by Jennifer Leonhard ( Smithsonian Institution ) on genetic material from eight museum exhibits, it was concluded that the quagga branched off from the plains zebra about 120,000 to 290,000 years ago. Since the earth's ice cover was particularly high at this time, the scientist argues that a change in climate could have been the cause of this split.

Animals from the Quagga Project

Several genetic studies confirmed the close relationship with the plains zebra, the DNA analyzes published in 1984 also prompted the start of an image breeding project of the quaggas from southern plains zebras. Especially individual representatives of the southern subspecies of the plains zebra ( Eq burchelli ) show a clear reduction in stripes, which is reminiscent of the quagga. In the meantime, the Quagga Project , initiated by taxidermist Reinhold Rau (1932-2006) in 1986, tries to build up a plains zebra breeding line through selective breeding, which externally resembles the Quaggas. Several copies from the third generation already show a considerable reduction in stripes. The aim of the project is to create an animal that looks very similar to the quagga and can possibly be released into the wild in the former habitats.

Quagga in the Natural History Museum in London

Only 23 quagga preparations have been preserved worldwide . The preparations are in museums, most of them in German museums and their scientific collections:

The name "Quagga" was borrowed from a Khoikhoi language. The double G was originally pronounced as a throaty ch, which is still used today in Afrikaans , but mostly no longer in other languages. Allegedly the throaty sound is derived from the call of the quaggas. Since there are no sound recordings of the animals' voices, this can no longer be traced today.