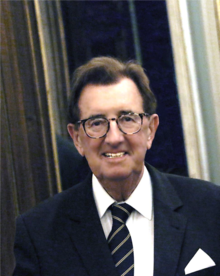 Rudolf Welser (born September 1, 1939 in Ybbsitz ) is an Austrian legal scholar , author and writer . He heads the research center for European legal development and private law reform at the Institute for Civil Law at the University of Vienna.

Rudolf Welser completed his law studies at the University of Vienna in 1963 with a doctorate in law. He completed his legal practice and became a university assistant at the chairs for civil court proceedings and for civil law at the University of Vienna. In 1970 he completed his habilitation with the thesis "Representation without power of attorney, At the same time a contribution to the doctrine of the culpa in contrahendo " for civil law. As a university lecturer, he immediately received appointments to chairs at the universities of Innsbruck, Linz and Vienna. He accepted the call to Vienna and from 1971 to 2007 he became full professor for civil law and head of the institute for civil law at the Faculty of Law. From 1981 to 1983 Welser was dean of the Faculty of Law, and from 1988 to 2007 he was the spokesman for the professorial curia of this faculty. From 1975 to 1980 he held lectures at the Vienna University of Economics as a visiting professor for insurance law. Today Welser is an honorary doctor of the Kültür University of Istanbul, the Vasile Goldis University of Arad, the Eötvös-Loránd University of Budapest, the New University of Ljubljana and the National and Kapodistrias University of Athens; also member of the Polish Academy of Sciences and Arts (PAU).

Rudolf Welser participated in numerous private law reforms in the Federal Ministry of Justice, especially in the area of ​​warranty law and inheritance law.

In 1970/71 Welser and his colleague Helmut Koziol wrote the two-volume textbook on civil law ("KW"), which is considered the standard work of Austrian private law in Austria and abroad. It is currently in its 15th edition and some 100,000 copies have been printed since 1970.

Since 2007, Rudolf Welser has headed the Research Center for European Legal Development and Private Law Reform at the Law Faculty of the University of Vienna. The scientific focus of the research center is dealing with the private law of the CEE countries. Professors from most universities in Central and Eastern Europe take part in the "Vienna Working Group" that exists at the research center. The members of the working group give lectures annually at the conferences, which mostly take place in Vienna, on certain private law topics from the perspective of their legal systems. For a number of years, the focus has been on dealing with questions of EU law, especially the implementation of EU directives in the individual CEE states.

Together with Helmut Koziol , Rudolf Welser is the author of the two-volume standard work on Austrian civil law, "Koziol / Welser", Volumes I (15th edition, 2018, edited by Kletecka) and II (14th edition, 2015, edited by Welser and Zöchling-Jud). In addition, about 300 publications in all areas of private law. Most recently, his large commentary on inheritance law appeared in a new edition (2019), as was a textbook on inheritance law. Welser is also editor of the publications of the Research Center for European Legal Development and Private Law Reform, which currently consist of 15 volumes.

Welser has also written 8 books with humorous content, such as “Quite funny”, “Experience has shown that the smell of cheese is unpleasant”, “Gramophone is not a first name”, “Eggs cannot be caught”, “Oats for the official white man”, “Dogs don't smell around Eck ”,“ Nonsense is not recorded ”and“ Bad things about the lawyers ”. Several publications in the program of the Vienna State Opera, including the Wiener Konzerthaus. Numerous readings of humorous texts, recordings on vinyl and CD, e.g. B. "There is no legal basis for evicting ghosts".