Sakon Nakhon is the social, political and economic center within a region of several hundred square kilometers, the city itself has 53,763 inhabitants (as of 2013).

On the banks of the Nong Han 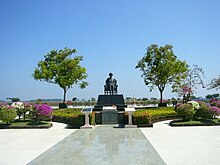 Statue of the Princess Mother Srinagarindra

The province of Sakon Nakhon is located in the northeast region of Thailand , the so-called Isan . It takes up the area of ​​the subdistrict ( tambon ) That Choeng Chum ( ธาตุ เชิง ชุม ) and is about 650 kilometers away from the capital Bangkok . It is located on the edge of the Mekong Plain , south and west of the city is a wooded mountain landscape. Sakon Nakhon is located on Nong Han Lake , the largest natural lake in northeast Thailand with an area of ​​125.2 km².

There is a regional airport in Sakon Nakhon (approx. 5 kilometers west of the center): Sakon Nakhon Airport (SNO).

In Sakon Nakhon is the mission station and the seat of the diocesan administration of the Roman Catholic Archdiocese of Thare and Nonseng . Their main church, the Archangel Michael Cathedral, is in the small town of Tha Rae ( ท่า แร่ ) on the opposite side of Lake Nong Han, hence the name. 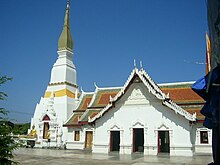