The Schack Collection (until 2009 Schack Gallery ) in Munich emerged from the art collection of Count Adolf Friedrich von Schack and is part of the Bavarian State Painting Collections . The collection mainly contains works by well-known 19th century painters. A first gallery building was built on the Count's property and was rebuilt several times. In 1909 the gallery moved to a larger new building on Prinzregentenstrasse . 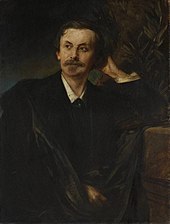 Graf von Schack was a patron who supported the Munich artists. An author and poet himself, Schack loved music and onomatopoeic poetry. During the painters' lifetime he bought numerous paintings, including by Arnold Böcklin , Moritz von Schwind , Franz von Lenbach , Carl Spitzweg , Carl Rottmann , Anselm Feuerbach , Eduard Gerhardt and other German landscape and history painters. As a collector, he preferred the subjects of mythology and travel to distant lands.

By his death in 1894, Graf Schack acquired around two hundred paintings from German artists and around seventy copies of old master paintings, including major works of Venetian painting such as Giorgione's Rural Concert and Titian's Pesaro Madonna , Venus von Urbino and the portrait of Emperor Charles V Maler of the copies was primarily Franz von Lenbach , whose Tizian copies for Count Schack are among the best painting copies of the 19th century in Germany, and August Wolf .

Schack bequeathed the valuable collection to the German Emperor Wilhelm II. Contrary to Schack's wish to show the collection in another location (presumably in Berlin), the Kaiser decided to stay in Munich in order not to encourage anti-imperial or anti-Prussian tendencies in Bavaria Afford.

The collection has remained almost unchanged to this day and is considered an important example of the art preferences of a private collector in the 19th century, which reflected the romantic world of images and ideas of that era.

Schack Gallery on Brienerstrasse around 1905

For the presentation of his soon to be large collection, Schack commissioned the architect Eduard Gerhardt to design and build an exhibition building. So in 1862, based on the example of the neighboring Glyptothek by Leo von Klenze, the first two-story gallery building was built on the property of Schack's Palais on Brienner Strasse . Just three years later, in 1865, Heinrich von Hügel rebuilt the gallery. It has been accessible to interested visitors since 1866. In 1871 Schack acquired the neighboring property and had his house with the existing buildings 1872–1874 converted into a representative villa in the neo-renaissance style according to plans by Lorenz Gedon . After Wilhelm II inherited the collection, he bought the gallery building on Brienner Strasse and had it renewed by Emanuel von Seidl for around 200,000  marks .

At the beginning of 1909, the collection moved to a newly constructed gallery building on Prinzregentenstrasse at the corner of Reitmorstrasse, which was built in a structural unit with the Prussian embassy in 1907–1909 based on plans by Max Littmann . The opening took place on September 18, 1909. The exhibition rooms on the ground floor, first floor and part of the top floor had partly central skylight and partly side light, which allowed the paintings to come into their own. Armchairs invited people to linger and look at them. Here the exhibits were given rooms that were subdivided and furnished according to artist. Among other things, there was a Lenbach Hall and a skylight hall with copies by August Wolf.

The former building on Brienner Strasse was destroyed in the Second World War . The new building on Prinzregentenstrasse was only partially damaged. After the damage was repaired, the Schack-Galerie was the first of the Munich art museums to reopen in 1950. In the 2000s, the building was extensively renovated and prepared for art exhibitions and cultural events. In 2008 the ground floor was reopened, in 2009 also the upper floor with gallery rooms and the large copy room used for musical and literary events. Since then, the gallery has been called the Schack Collection . During the general renovation of the Neue Pinakothek from 2019 to probably after 2025, a selection of works from its holdings will be exhibited in the Schack Collection.

Here are some paintings that come from the Schack collection:

Museums and collections in the Lehel in Munich