Battle at the Persian Gates

from Wikipedia, the free encyclopedia
Battle at the Persian Gates
Part of: Alexanderzug
Battles of the Alexanderzug 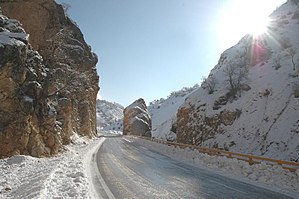 The valley of Meyran with the road from Yesuj to Eqlid.

The Battle of the Persian Gates was a military conflict of the Alexanderzug in what is now Iran , in which Alexander the Great in January 330 BC. BC could occupy a strategically important bottleneck that opened the way to Persepolis for him . In this battle he faced the last contingent of the Persian army before the end of the great king Dareios III. opposite.

In October 331 BC The Persian great king Dareios III suffered. a crushing defeat against Alexander in the battle of Gaugamela , after which his army disbanded and he himself fled to the core Persian provinces in what is now Iran. After a few days of rest in Babylon , the victorious Alexander took up the chase to get Darius III. to put to a final fight as quickly as possible. After he died at the end of autumn in 331 BC After taking the royal city of Susa without a fight, he chose Persepolis as his next destination, the oldest capital of the Persians, located in the central province of Persis . Following the Persian royal road, he probably crossed the Pasitigris (Karun) at Shushar and reached the foothills of the southern Zāgros Mountains in the last month of the year . Here the mountain people of the Uxians demanded a tribute from him for passing their high-altitude passes, which the Persian great kings had to pay before. But after a military lightning action, after which the Uxians had to submit, Alexander was able to continue the march. Two alternatives for reaching Persepolis opened up to him. Either he continued to follow the Königstraße, which, however, took more time to go around the Zāgros to the south, or he shortened the route by passing the mountain region directly.

Presumably at today's Haftgel, Alexander decided to divide the army and entrusted Parmenion with command of the entourage, the Thessalian cavalry, the Greek federal troops, the mercenary associations and other heavily armored units. Parmenion should continue the troops entrusted to him along the Königsstrasse. Alexander himself intended to take the Macedonian infantry , the Hetairenreidererei , the Agrianen , the light cavalry and the archers over the landscape characterized by mountain passes, which were known as the "Persian Gates", as they marked the border of the Elam landscape in antiquity and Persis marked. If one takes the size of the individual army contingents at the beginning of the Asian campaign as a basis, the troops are likely to have made up to 17,000 men. South of Denar Mountain near today's Yasudsch , the route chosen joins a wooded plain (Mulla Susan), which Alexander reached after a five-day march. To the east, this level can only be left through the particularly narrow gorge of the Meyrantal (Tang-e Meyran), which is flanked on both sides by steep rock faces. It lies on the border of the province Kohgiluyeh and Boyer Ahmad to Fars and from that of Eqlid happened leading street. Alexander reached this gorge in the first days of the year 330 BC. BC, which was to prove to be the gate, the passage of which had to be fought for against a Persian army.

At that time the governor ( satrap ) of Persis was Ariobarzanes , who had already led the contingent of his province at Gaugamela. In contrast to some other governors, he did not go over to Alexander's side after the defeat, but Darius III. remained loyal, for which he wanted to stop the advance of the enemy into central Persia on the borders of his province.

With his troops, Ariobarzanes had occupied the east exit of the gorge, which he made impassable with a heaped wall. Behind these as well as on the rock faces of the gorge he had his archers line up. The historical scholarship is largely unclear about the credibility of the traditional strengths of his army, as the numbers given by Arrian seem too exaggerated. Alexander had his troops camped on the forest level at the western exit for one night and wanted to start the march straight through the gorge with them the next day. Apparently he thought a breakthrough through the wall by means of a frontal attack was possible. But when the Macedonians were halfway through the gorge, the Persians began to cover them with a hail of arrows at a signal from the rocks and the wall. In addition, they rolled down large boulders from the rock walls, against which the Macedonians could not defend themselves with their shields in a defensive phalanx. After uncertainty had spread among them about the high losses and the shelling from three sides, Alexander led them back out of the ravine and into their camp as they retreated.

Since Alexander and his followers did not have sufficient local knowledge, but also did not want to accept a time-consuming march to bypass the defensive position, because this would have been connected with the admission of defeat, he asked the prisoners about other ways of bypassing the gorge. Among them was a local goatherd who was a Lycian on his father's side and a Persian on his mother's side and who spoke both parents' languages. For a reward of 30 talents , he revealed to Alexander a path hidden by rocks, which could be used to bypass the gorge and the Persian defenses. Allegedly, the oracle of Delphi had predicted the Lycian service for Alexander many years earlier, according to which a wolf ( Λύκος , Lykos ) would lead him in the fight against Persia. After dividing the troops, Alexander led the majority of his warriors in a forced night march past the Persian positions to the rear of their camp. The march was grueling due to a high blanket of snow, but also went unnoticed by the Persians under cover of darkness. He had left back only two detachments of the Pezhetairen ( Krateros , Meleagros ), as well as a few hundred horsemen and archers, to whom he had given the order to approach the opposing positions again for the following morning. After the successful evasion, Alexander divided his men again by ordering three troops ( Philotas , Koinos , Amyntas ) to march on to the river Araxes (Bendemir) , which was the last natural barrier ten stages before Persepolis, the one with a bridge to be built should be overcome.

As the next morning drew near, Alexander sent his warriors running towards the fortified positions of the Persians, who were startled from their sleep and panicked by the unexpected direction of the attack. They quickly fled into the mountains and thus exposed the Persian camp of its protection. Alexander had the conquered places occupied with 3,000 Macedonians under the leadership of Ptolemy and then began a direct attack on the Persian camp. With the sound of a trumpet, he gave the signal to the men of the crater advancing in the gorge to attack the wall at the same time. Now it was the Persians who were harassed from two different directions. And since, in contrast to the Macedonians, they were only lightly armed, they were quickly defeated in the close combat that followed. The Persians tried to retreat to their positions, but where they were received by Ptolemy and his men.

According to tradition, the Persian army was destroyed in a downright slaughter, only a few warriors were able to escape from the battlefield. Including Ariobarzanes, who fled to Persepolis to hide there with his remaining men. But the news of his defeat had rushed ahead of him, so that he was refused entry by the defected castle commander of the city. With the remnants of his army, he therefore withdrew to the Araxes, which Alexander had meanwhile crossed. In a final battle with the conqueror, Ariobarzanes was killed.

After the final battle on Araxes, Alexander was able to manage in the last days of January 330 BC. Move into the oldest Persian royal city of Persepolis without a fight. For the company, which had been declared a campaign of revenge by the Hellenes, this station represented an important propagandistic goal, as they had to conquer the political center of the Persians in their heartland and thus retaliate for the sack of Athens by Xerxes I in 480 BC Can practice. And just as the Temple of Athena ( Parthenon ) was destroyed at that time, the Persian royal palace was burned down and the city itself was given up for plunder. The religious center of the Persians, the nearby Pasargadae , was consciously spared by Alexander, as he was aware of the importance of this place for the Persian ruler's cult. He himself had long since strived to succeed the Achaemenids in Asia (see Alexander Reich ) as a worthy successor to Cyrus II , to whose grave he went on a pilgrimage immediately after entering Persepolis.

In the spring of 330 BC Alexander took the pursuit of the fugitive Dareios III. up again and moved into the median capital Ekbatana . The Persian king intended to face him again at the "Caspian gates" near Rhagai , but this time he found no support from his followers, who now voluntarily passed over to Alexander. On the further flight he was murdered by Bessos soon afterwards .