Mirounga is a redirect to this article. For more meanings, see Mirounga (disambiguation) .

The elephant seals ( Mirounga ) are the largest seals in the world. They are named after the trunk-like enlarged nose of the adult males. They belong to the dog seals , although they are more similar to the ear seals in behavior and in some characteristics .

There are two very similar types:

The size differences between males and females are considerable. A bull can be 6½ meters long and weigh 3500 kilograms, a cow only 3½ meters and 900 kilograms. The elephant seals differ from other seal species mainly in their size, pronounced sexual dimorphism and the development of the nose, which in adult males forms a conspicuous trunk . After constant growth, the trunk reaches its full size around the age of eight and then hangs with the nostrils down over the mouth. During the mating season, this trunk can be enlarged again considerably by increasing the blood and air supply and is used to reinforce the bulls' calls.

Features of the skull

Skull of a northern elephant seal

In both sexes, the teeth are primarily designed to grab and hold the prey, which is then swallowed whole. The animals each have two incisors in the upper jaw , followed by a strong canine tooth (caninus), followed by a total of 3 to 7 very small and simple teeth (postcaninae), which are made up of three premolar teeth and a variable number of molars (Molares) together. There is only one incisor in the branch of the lower jaw. The animals have a total of 30 teeth, but the postcaninae are almost inoperable and support the large canine teeth when holding the prey. The canines are enlarged and sharp in both sexes, but in the males they are much stronger than in the females. The strong canine teeth are also used by the males in rival fights during the mating season.

During the mating season, the otherwise rather solitary elephant seals gather in large colonies. One bull has ten to twenty cows. The cops fight violently for ownership of a harem. Younger and weaker bulls are pushed to the edge of the colony, where they find less favorable conditions. But they are constantly in waiting and try again and again to mate, which leads to fights over and over again for weeks. Under the protection of a dominant bull, the so-called beach master , the cows throw their offspring that were conceived the previous year. They care for the young for a few weeks before they mate with the bulls again.

If a bull wants to mate with a cow, he puts a front flipper over her and bites her neck. After that, copulation begins. When the cow struggles, the bull will roll on her and make her unable to move with his weight.

The constant fights as well as the brutal copulations lead to young animals being crushed by old males. As a result, a not inconsiderable number of calves die every year in an elephant seal colony.

Elephant seals become sexually mature when they are three to four years old. However, bulls are not strong enough to guard a harem until they are eight or nine years old, so mating at an earlier point in time is unlikely. Because of the exhaustion caused by the fighting, the life expectancy of a male elephant seal at 14 years is significantly lower than that of a female at around 18 years.

The food of the elephant seals is fish and octopus . Typical diving depths for elephant seals are between 200 and 600 meters, depending on the time of day. However, significantly greater depths can also be reached; a southern elephant seal was registered at a depth of 2388 meters as part of the Census of Marine Life . Reaching such depths is made possible for them by the fact that, due to their body (similar to whales ), they have an enormous volume of blood that can absorb and store a lot of oxygen . In addition, like whales, organs (e.g. liver and kidneys ) are shut down during dives to reduce oxygen consumption.

The natural enemies of the elephant seals are the great white shark and the orca , which can be dangerous especially near the surface of the water. 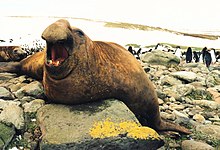 The male southern elephant seal is the largest representative of the carnivores.

The generic name Macrorhinus , which was given by Georges Cuvier , is often found for elephant seals . However, this is identical to the name of a genus of beetles, so that the younger name Mirounga from John Edward Gray became valid. The name Mirounga is derived from "miouroung", the name for southern elephant seals in a language of the Australian Aborigines .